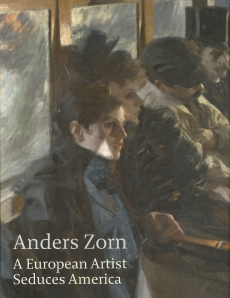 The cover of the exhibition catalog

From February 28 to May 13, 2013, the Isabella Stewart Gardner Museum in Boston hosted a large exhibit titled Anders Zorn: A European Artist Seduces America. The show re-evaluated the famous Swedish painter’s impact in the 1900s on America, where he was once held in high regard before being largely forgotten. The exhibit featured several international loans and was complemented by a series of lectures that experts on Zorn and his period presented.

Why am I writing about a retrospective on the activities of a Swedish painter in Boston? Because the American School of Classical Studies at Athens owns a portrait painted by Zorn—an image of William Amory Gardner (also known as WAG), the nephew of Zorn’s most important American patron and friend, Isabella Gardner. A balding WAG poses in three-quarter view while seated; he wears a black suit with an impressive red rose pinned on his left lapel. WAG himself never liked the portrait.

Anders Zorn (1860-1920) made his American debut in 1893 in Chicago, where he participated in the World’s Columbian Exposition as the commissioner of fine art for Sweden. Jack and Isabella Gardner were also in Chicago then because they had loaned one of their paintings to the exhibition. “A woman dressed in black came in and looked around in my rooms. She stopped in front of my Omnibus, turned to me, pointed at the painting in question (and said) ‘I want to have that painting. May I buy it?’ ‘Yes’ I answered.” The Gardners bought Omnibus for $1,600. It was the most expensive picture in the show, and that act launched Zorn’s American career and a long-term friendship with Isabella Gardner. A year later, Zorn painted Isabella Gardner in Venice, capturing the vivacious, art-loving character of his patroness, and, in so doing, pleased the Gardners immensely. Isabella immediately hung the painting in her house to replace the portrait John Sargent had made for her. With the support of the Gardners Zorn then organized several other exhibits in the United States and received many commissions to paint family members and friends of the Gardners. After her husband’s death, to distract Isabella from grief, Gardner painted the portraits of several of her relatives including that of her nephew WAG in 1899. But later, after Isabella’s death in 1924, her nephew confessed to a friend: “My folks have always hated it. I myself had it painted to please Aunt Belle, but never liked it and felt last year perfectly willing to exchange it for a few dollars” (Eze 2013, 60).

But who was William Amory Gardner and what was his association with the American School of Classical Studies at Athens? Gardner served on the School’s Board of Trustees from 1910 until his death in 1937, at which time he left a bequest of $5,000, an amount equivalent to the annual salary of the director at the time. His portrait by Anders Zorn, the one he never liked, now hangs on the wall of the ASCSA director’s house and has recently been included in the catalogue of Anders Zorn: A European Artist Seduces America (Tostmann 2013, 150).

Born in 1863, WAG and his brother were raised by their aunt, Isabella Stewart Gardner, after the death of their parents. In 1884, Gardner, together with Endicott Peabody and Sherrard Billings, founded the Groton School in Massachusetts, which soon became one of the most prestigious preparatory schools in the United States and has had many famous alums. It is from the biographies of its distinguished students that we learn the most about Gardner. Known as “Uncle Billy Wag” to his students, Gardner was “something of an anomaly at the School” (Ward 1985, 187). At an institution that emphasized austerity and a Spartan way of life, flamboyant and eccentric Gardner “built for himself a mansion on the School grounds that was called the ‘Pleasure Dome,’ and was complete with a stage, a swimming pool, squash courts, and a maze. Here every Sunday afternoon he served the boys cake and ‘google,’ a sticky-sweet drink that came in two colors and one flavor – lemon” (Ward 1985, 188).

In the biography of another famous Groton alum, the legendary publisher of the Chicago Tribune, Robert R. McCormick, Gardner is described as an accomplished yachtsman who might be seen on the nearby river dressed “in spats, orange shoes, and green waistcoat”(Smith 2003, 55).

Gardner, who taught Classics at Groton and published In Greece with the Classics (1908), is also described as an unusual teacher who while discussing the Iliad, could take his students on an imaginary world tour. One student recollected that there was “a passage in the Iliad which mentioned dogs. Wag was off like a bloodhound. He told us about dogs, which led to architecture in Belgium, the canals of Holland and New York State, various methods of burying the dead, famous epitaphs, the Battle of Thermopylae, Aegean steamers, and the unreasonableness of publishers. As we left the room he chanted after us in Greek the twenty-line assignment” (Ward 1985, 188). For young Franklin D. Roosevelt, Gardner was a source of inspiration, his favorite teacher at Groton: “I can learn better and quicker with him than anyone else,” he wrote to his parents (Ward 1985, 189).

To the list of students that Gardner inspired, we can add Lincoln MacVeagh (class of 1910), who roomed at Groton with G. Hall Roosevelt, the brother of Eleanor, who had recently married Franklin Delano Roosevelt. MacVeagh, who developed a strong love for Classical Greece, was later appointed Ambassador to Greece by President Roosevelt in 1933 (Iatrides 1980). From 1933 until 1948, with breaks for the war, MacVeagh employed a variety of means to support excavation by the American School on the East Slope of the Acropolis and its restoration of the Lion of Amphipolis (Robinson 2013, 112-118). Of equal importance is the fact that he passed his love of Greece to his family: his daughter Margaret was a fine classicist and his grandson, Stuart MacVeagh Thorn, is today a field archaeologist who excavates in Laconia.

Prior to 1986 when the Secretary of the American School, Robert A. Bridges, received an inquiry about WAG’s portrait from the archivist of the Groton School, Douglas Brown, very few people, if any, knew the provenance of the portrait. In two letters written on August 26th and November 4th, 1986, Groton’s archivist revealed unknown details about the portrait’s cultural biography. “It appears that George Peabody Gardner, one of the executors’ of W. Amory Gardner’s estate, had bought the painting from the estate when WAG died and then gave it to the Groton School. Probably because we had already a fine oil portrait of WAG done by Ellen Emmet Rand, Mr. Peabody (headmaster) was happy to have the Zorn portrait go to another institution with which WAG was especially connected, your school. And so it was crated and sent off to you, having been at Groton about one year I believe,” explained Brown in his November 4, 1986 letter to Bridges. Then Brown asked if the School could supply Groton with a photo of the portrait of “our Billy Wag, as he was sometimes known.” “It occurs to me that one of our masters, L. Hugh Sackett, will be in Greece this year and that he might be able to take a photograph for us…”.

We also learn from the ASCSA Archives that three years later, in 1989, the School asked Sotheby’s to determine the value of the portrait, because “[the Trustees] wanted very much to put it up for auction. The estimate, however, was too low and the Trustees opted for insurance instead,” wrote Ludmila Schwarzenberg, the School’s U.S. Administrator at the time, to Robert Bridges on July 12, 1989.

WAG may not have liked the portrait himself, but it is a fine reminder of the ASCSA’s connection with Groton and the many classicists and field archaeologists, as well as School Trustees, that this preparatory school has inspired. The Gardner portrait is part of the School’s institutional history and, together with the bronze Actaeon by Paul Manship, which was given to the School by Gorham P. Stevens, is one of its treasures — as once also was the Neoclassical house at Ploutarchou 9, where the Blegens and the Hills lived until 1971.