← Living Like Kings: When the Palace of Prince George Was the Annex of the American School of Classical Studies at Athens
“All Americans Must Be Trojans at Heart”: A Volunteer at Assos in 1881 Meets Heinrich Schliemann → 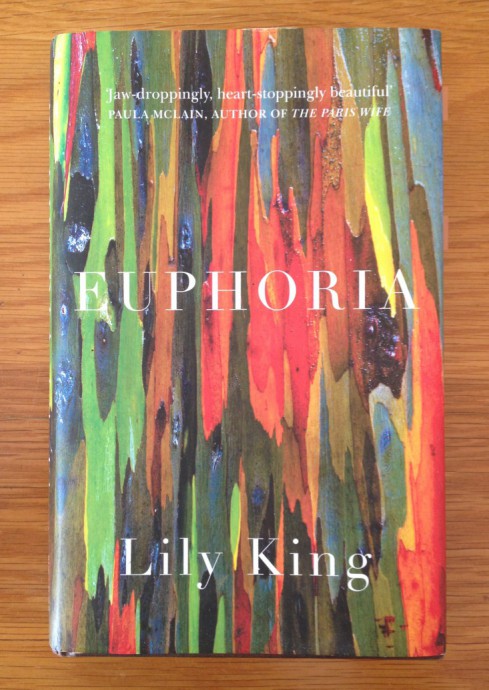 “My loves remain wine to me, yet I become too quickly bread to them”
One of Margaret Mead’s favorite phrases, inspired by Amy Lowell’s poem A Decade (1919).

Although I have never read anything by either woman, Mead’s work with the tribes of New Guinea was familiar. A recent documentary by Fraser Heston (son of Charlton Heston) about Michael Rockefeller’s disappearance on the island in 1961 rekindled my interest in New Guinea. The documentary includes film footage from 1969 that shows a white man canoeing with a Papuan tribe. It asks whether the young Rockefeller went “missing” voluntarily rather than fell victim to the cannibal instincts of the Papuans as previously suggested. (http://www.dailymail.co.uk/news/article-2946787/Is-proof-lost-Rockefeller-heir-joined-tribe-naked-cannibals-Picture-shows-white-man-Papuan-man-eaters-eight-years-mysterious-disappearance.html ).

When I saw EUPHORIA being promoted in a recent issue of The New Yorker, I bought it after taking a brief glace at several reviews, all of which agreed that it was a good read. And it proved so. King’s story is inspired by one episode in Margaret Mead’s life: the few months that she, her husband (at the time) Reo Fortune, and her lover (and future husband) Gregory Bateson spent in Papua New Guinea in 1933. Ruth Benedict (Helen Benjamin in the novel) also lurks in the background. Although the story is told by two narrators, Andrew Bankson and Nell Stone (inspired by Gregory Bateson and Margaret Mead), the main hero is Bankson. It’s through his eyes, the eyes of a lover, that we see Nell Stone.

Reo Fortune, Margaret Mead, Gregory Bateson, 1933. Mead’s papers were given to the Library of Congress.

King’s novel is balanced. Historicity blends well with fiction; the heroes have flesh and blood. They are not puppets as is so often the case in historical fiction where heroes appear two-dimensional, their third dimension being eclipsed by the author’s desire to write history. At the same time EUPHORIA is a well-researched book. We read about the development of ethnography and anthropology in the first decades of the 20th century, and the tension between social and physical sciences, such as biology, zoology, and chemistry. Nell and Helen are students of Franz Boas; Andrew was introduced to ethnology by another famous anthropologist, Alfred Cort Haddon. “It was a bit terrifying, a bit of a free fall, to go from an extremely ordered and structured physical science to a nascent, barely twenty-year old social science” Andrew confides to the reader (33).

King is also aware that people like Margaret Mead and Gregory Bateson may have chosen to study primitive cultures out of a need to escape from America’s rising industrialism in the early decades of the 20th century. “Nell and I spoke of never having felt aligned with our culture, with its values and expectations” (191). It reminded me of Eva Palmer, Isadora Duncan, and George Cram Cook, and the other Americans expatriates who for the same reasons rambled through Greece, Italy, North Africa, and the Middle East in search of different and simpler ways of life (see my post at: https://nataliavogeikoff.com/2015/01/01/grece-en-vogue-a-new-wave-of-american-philhellenism-in-the-1920s/).

After reading EUPHORIA I have a new appreciation for the differences among the New Guinea tribes, some being fierce and relentless, others milder, but all with rituals and beliefs that are incomprehensible to those with western cultural values. EUPHORIA also prompted me to follow up on New Guinea. I have been reading Jared Diamond’s Guns, Germs, and Steel : The Fates of Human Societies (1997). An evolutionary biologist by training, Diamond lived for years in New Guinea. His research led to interesting conclusions concerning the reasons for lagging primitivism (and cannibalism) among the island’s native population. For example, the lack of domesticated animals, such as cattle, and wild game on the island (only kangaroos and a big flightless bird were native to New Guinea), as well as lack of domesticable cereals and pulses, put severe limitations on the development of farming among the New Guinea populations. Diamond also does not hesitate to take his theory one step further: “Protein starvation is probably also the ultimate reason why cannibalism was widespread in traditional New Guinea highland societies” (149).

EUPHORIA, however, is not just about anthropology and primitive tribes. EUPHORIA has it all. It’s a page turner, one of those novels that you look forward to reading in bed in the evening. The dominant theme is a love story, an erotic triangle: two men in love with Nell, each one loving her his way. We are not sure what Nell wants, but she hates ownership. “My loves remain wine to me, yet I become too quickly bread to them” (93). Nell left Helen to marry Fen. “Perhaps I made the conventional choice, the easy way for my work, my reputation, and of course for a child” (93). In New Guinea she falls in love with Andrew; they are kindred spirits.

For long stretches of time it felt like we were crawling around in each other’s brain.

But she is already pregnant with Fen’s child. Knowing that in real life Mead left Reo Fortune to marry Gregory Bateson and that her daughter was from Bateson, I was curious to discover how King would end the novel. How many times have we read a good book and been disappointed by the end? Fortunately, King surprised me. The end the story may well be the best part of the book.

When you came, you were like red wine and honey,
And the taste of you burnt my mouth with its sweetness.
Now you are like morning bread,
Smooth and pleasant.
I hardly taste you at all for I know your savour,
But I am completely nourished.