← Skyromania? American Archaeologists in 1930s Skyros
Clash of the Titans: The Controversy Behind Loring Hall →

She was twenty-four years old and had come to Greece the year before, to study at the American School of Classical Studies at Athens (ASCSA or the School hereafter). Before that, she had lived in Philadelphia and studied at Bryn Mawr College. After attending the year-long program of the ASCSA, she and Hazel Hansen, another student of the School, were invited by archaeologist Hetty Goldman to dig at the Neolithic site of Eutresis, not far from Thebes, in Boeotia.

Burr would live for six months in a small Albanian (Αρβανίτικο) village called Parapoungia (later renamed Leuctra in remembrance of the famous battle of 371 B.C. that took place nearby) without the barest necessities, in order to take part in the excavations. Once a week she would travel to Athens to take a bath and receive her correspondence. Nevertheless, in her diary, there is hardly any complaint about the primitive conditions of her life in the village. On the contrary, her diary is full of negative observations about the lack of congeniality at the American School. First time away from family and the protective environment of Bryn Mawr College, Dorothy felt inhibited by a world dominated largely by men.

“I am really naïve…,” “I fear of the civilized men… never can I relax particularly with the men – I must always be alert, I’m not sure I approve of coeducation,” she noted here and there in her diary.

A woman of high intelligence and exceptionally well-read, she found the School musty and suffocating. “An intellectual woman is an anomaly,” and “God damn femininity” she wrote when her male companions at the School objected to her joining them in a small excavation on Mt. Hymettus on April 10, 1924. The spiritual balance she was looking for came a month or so later when she joined Carl W. Blegen and Hetty Goldman’s excavation at Phlious, near Nemea. There, for the first time and amidst the hardship of digging, she felt and would seek thereafter the healing touch of the Greek countryside.  When Goldman asked her to dig at Eutresis she accepted with much enthusiasm.

From the moment Dorothy set foot in the village of Parapoungia (Παραπούγγια), she made friends with the local women and girls. Not familiar with cameras and seeing her with one, the village women immediately wanted to be photographed. “In the morning I became general village photographer, to take all the peasants in full costume” she wrote on September 21, 1924. Thanks to Dorothy’s love for photography, we have a rare portrait gallery of the local women clad in elaborate festive garments.

Local woman from the village of Parapoungia posing in front of Dorothy Burr’s lens.

Goldman and the two girls rented rooms in a local house, which they also used as an apotheke to store the finds from the dig. When Hazel left after the excavation was over, Dorothy agreed to stay longer in order to help Goldman process the pottery and the rest of the finds. She worked from 6 a.m. until 10 p.m., “going hard all day,” but “feeling strength and energy resourceful.” Late in the evening, her Albanian landlady would teach her local dances. She and Goldman would be invited to weddings and baby christenings, where she would dance joyfully to the sounds of flute and mandolin.  Coming from an industrialized country and having lived in a big city, she found their rituals spelbindingly primitive.

Hear how she described one of the wedding ceremonies she attended! Sitting at a long table with the male relatives singing “amoebically, with queer droning, second parts,” she watched the women, kerchiefed, joining the ceremony:

“…[they] danced round and round while the men sang, and then they answered in whining voices.” At 11 p.m., as they were about to leave, the bride sat down with the other women around her. “Then they were expected to weep and they wept almost immediately. It was uncanny; the tears slowly trickled down the bride’s face; some of the women almost sobbed, and also the men! All the time they chanted a melancholy song — only the women. Suddenly one felt face to face with the past – without a haze— as though one was hearing one of Sappho’s epithalamia.”

What impressed her most was “the solemnity and ease of the ceremony … entirely unconscious and unreflectively done, with the confidence of ages” (November 1, 1924). It was one thing to study Sappho’s poetry and dance around the Maypole at Bryn Mawr College, and another to be part of an ancient ritual in the land of Sappho.

On Sundays and holidays, always with her camera, she would take trips on foot and mule to Boeotia, Phocis, and Euboea, looking for ancient sites. In reality she “pile[d] up vignettes of Greek life –as small as perfect as Homeric similes: two tiny caped figures tending sheep and barely toddling lambs; a carved distaff, like a fairy godmother’s for spinning of tales; the shepherds’ huts upon the mountain by a vanishing lake. I have learned why the shepherds’ crooks are small and narrow – to catch the feet withal—and goatherds’ tall and wide to catch the necks withal.” So she penciled in her diary after a three day trip to Parnassus and Delphi (December 11, 1924).

During one of her trips she came across a wanted bandit “with a musket, long life, short knife and field glasses!” Not only didn’t he hurt her but “he was amused at my trying to get on my mule in my cape but said nothing” (October 26, 1924). Even the local newspaper wrote about her thick mantle. One day as she eating in a restaurant at nearby Thebes (a town of about 20,000 people) she was shown a passage in Kadmos of January 18th [1925]:

“An English young lady who has been spending some time in our town for archaeological study – a few days ago with the cold appeared in the market with a Vlach cape. Everyone gaped literally at the sight. Fancy now if it were possible for a Greek girl to try such a thing, she would think that in this condition she would be looked on as a carter accompanied largely by a curious mackerel that gaped about her,” she translated in her diary.

Teased or not about her wool cape, the truth is that Dorothy would not have survived the cold Greek winter without it. If the wedding ritual resonated with her verses of Sappho, the piercing and comfortless winters of Greece reminded her of Hesiod. “A sense of winter is rare in our sophisticated world that holds the seasons in chains. We may nip our noses for fun skating or sledding and then come back to warm baths and evening dresses and huge log fires. But to feel the winter as an oppression, to be lived through as best as one can for the sake of the summer, never to be able to let one’s skin breathe … Hesiod had it; he knew that Boreas pierced the thin hair of goats (even of capes) and his maiden was no adventurer!” (December 11, 1924).

Dorothy Burr belonged to a generation that disliked modern and industrial America, searched for primitivism, and read Nietzsche. During her first trip to Delphi in the fall of 1923, she had encountered George Cram Cook and Susan Glaspell, a pair of writers who had left America to live in the company of shepherds on the slopes of Mount Parnassus: “At supper G. Cram Cook, husband of Susan Glaspell, appeared in Greek costume in the restaurant – looking handsome and ridiculous. He is writing four plays on modern Greece…” she wrote on October 15, 1923.  Despite the slight sarcasm that one may detect in her comment about Cook, I suspect that her happenstance encounter with Cook might have influenced her decision a few months later to accept Goldman’s invitation to live in a rural village not far from Parnassus. (see also my post about George Cram Cook at: https://nataliavogeikoff.com/2013/08/01/going-native-the-unusual-case-of-george-cram-cook/

Dorothy Burr returned to America in the summer of 1925. She would go on to become a famous archaeologist studying and publishing terracotta figurines.  In 1934 Dorothy married Homer Thompson, a Canadian archaeologist. Their twin daughters Hope and Hillary were born in 1935; their third, Pamela, was born in Athens in 1938.  Dorothy and Homer would devote the largest part of their common life to the excavation of the Athenian Agora, spending half of each year in Greece. In 1987 Dorothy was awarded the Gold Medal for Distinguished Archaeological Achievement by the Archaeological Institute of America. I never met Dorothy Burr but I remember the Thompsons sitting in the front row at lectures at Bryn Mawr College, where I was a graduate student in the late 1980s. I would meet Homer Thompson in 1998 when I went to Princeton to discuss with him the possibility of donating his personal papers to the School, which he did. Today, his papers, after being catalogued in an exemplary fashion by Liz Ward Papageorgiou, are accessible to scholars of all disciplines. 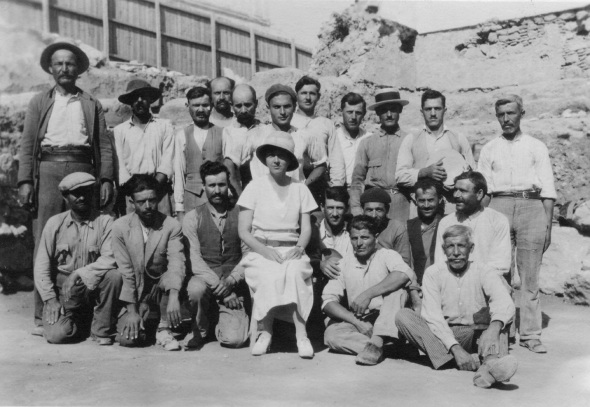 There are two long biographical essays focusing primarily on Dorothy Burr’s scholarly impact on Classical Archaeology (Uhlenbrock 2004; Havelock 1981). What is less known is her gift for writing, her zeal for painting landscapes, and her passion for photography. Her photographic collection at the ASCSA numbers 2,343 photos and negatives covering two periods: her first two years in Greece (1923-1925), and then a period of eight years (1931-1939) when she would spend substantial periods of time in Greece as an excavator in the Athenian Agora.

Of all our photographic collections in the Archives of the ASCSA, hers is by far the most popular in Greece, because her photographs reach out to a large audience outside academia. Digitized in 2008 with European Community funding, Dorothy Burr Thompson’s photographs quickly went viral on the web. Compared to our other collections of photographs by American archaeologists (men and women) from the same period, her photos differ greatly in context and spirit. While her mates at the School were photographing Greek landscapes and antiquities empty of people or themselves against the backdrop of ancient ruins, Dorothy’s lens focused on the people of the Greek countryside with affection and poetic empathy.  Unlike her companions and despite her classical education, she managed early on to free herself from the tyranny of the ancient landscape, capturing it humanized and meaningful.

I am grateful to Pamela Sinclair Todd for permission to quote from her mother’s diaries, and Eric Pumeroy, Head of Special Collections at Bryn Mawr College, for allowing me, a few years ago, to have access to the transcripts of the diaries prepared by Mabel Lang and Lore Ostwald.