← Expat Feasts in Athens on the Eve of the Balkan Wars
Who Went to Schliemann’s Wedding? →

The Man from Damascus, the Good Wife, and Baby Solon: R.I.P. at the American School of Classical Studies at Athens

“You enter a reception hall of marble and go up a flight of marble steps which give the effect of entering a museum, as there are marble busts and old sculptures round that have been dug up…” Major A. Winsor Weld wrote to his wife on October 26th, 1918, upon entering the American School of Classical Studies at Athens (ASCSA or School hereafter). He and six other officers of the American Red Cross including Lieutenant Colonel Edward Capps would live in the School’s premises until July of 1919. (At the time one entered the Library through the Director’s residence.) Although the ASCSA was already building a small collection of antiquities –mostly pottery sherds and other small objects picked up on walks and informal surveys– the antiquities Weld described are of a different scale. The busts he refers to must have been plaster casts of originals similar to the one displayed above the fireplace mantle in the Library in a photo from 1902. I believe that the other “old sculptures” on display, the ones that “have been dug up,” were three Roman marble funerary reliefs unearthed in 1894, at the corner of Vasilissis Sophias (then Kephissias) and Merlin (then Academy) street, exactly opposite the Palace (now the Greek Parliament), during the construction of a mansion by Charles Edward Prior Merlin (1850-1898). Named after one of Merlin’s French ancestors, the “Hôtel Merlin de Douai” has housed the French Embassy since 1896. 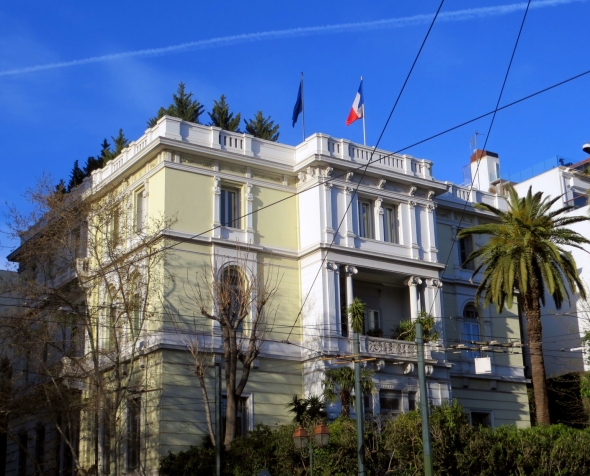 “In digging for the foundations of the large house which Mr. C. Merlin, the well-known artist and photographer of Athens, is building at the corner of Academy and Kephissia Streets, the workmen came upon considerable remains of an ancient cemetery. At my suggestion Mr. Merlin made over to the American School the right of publishing these discoveries, and afterwards generously presented to the School three reliefs and one other inscribed stone, together with some smaller fragments. The finds were made in the autumn of 1894. Only a part of them came under my observation at the time; hence the description of the graves and their location rests in part upon the accounts of Mr. Merlin and his workmen” reported Thomas Dwight Goodell a year later (American Journal of Archaeology 10, 1895, pp. 469-479). 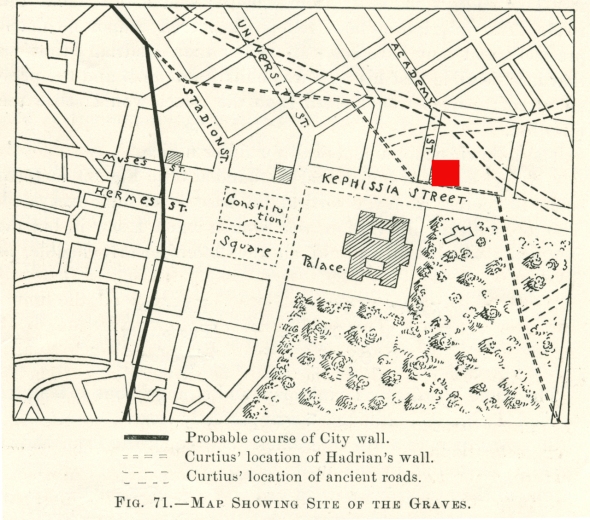 The publication of the sculptures was divided in two: Goodell presented the circumstances of their discovery and discussed the style and date of the inscriptions carved on the reliefs, while Theodore Woolsey Heermance focused on the style of the largest stele (ASCSA ASI 1), which depicted a middle-aged man from Damascus, according to the inscription (—]ΛΕΥΚΟΥ ΔΑΜΑΣΚΗΝΟΣ) on the architrave. This stele was fully published in 1965 by Sterling Dow and Cornelius Vermeule (Hesperia 34, 1965, pp. 273-297). Damascenus’s first name is not preserved but Dow and Vermeule restored his father’s name as Seleucus. The man from Damascus probably belonged to the small colony of Syrians who lived in Athens during the early 2nd century A.D.

In addition to the imposing Damascenus, the smaller reliefs represented a small boy, Solon (ASCSA ASI 2), who died when he was six months old, and a woman named Statia Thallousa (ASCSA ASI 3). William D. E. Coulson, who together with Iphigeneia Leventi re-published the two smaller stelai, notes that Solon is not depicted as an infant but as a child. He suggests that Solon’s parents purchased a stele from stock or perhaps “chose the image of an older boy in order to express some quality that their child might have developed if it had survived.” Whatever their intention, it is the heart-breaking epigram that reveals the extent of the parents’ mourning:

“Why, Hades, have you hurried the baby and sweet Solon, the beautiful six months’ old baby to take down without mercy; what a pain for the miserable parents, you Destiny have caused” (Coulson and Leventi 2001, p. 304). 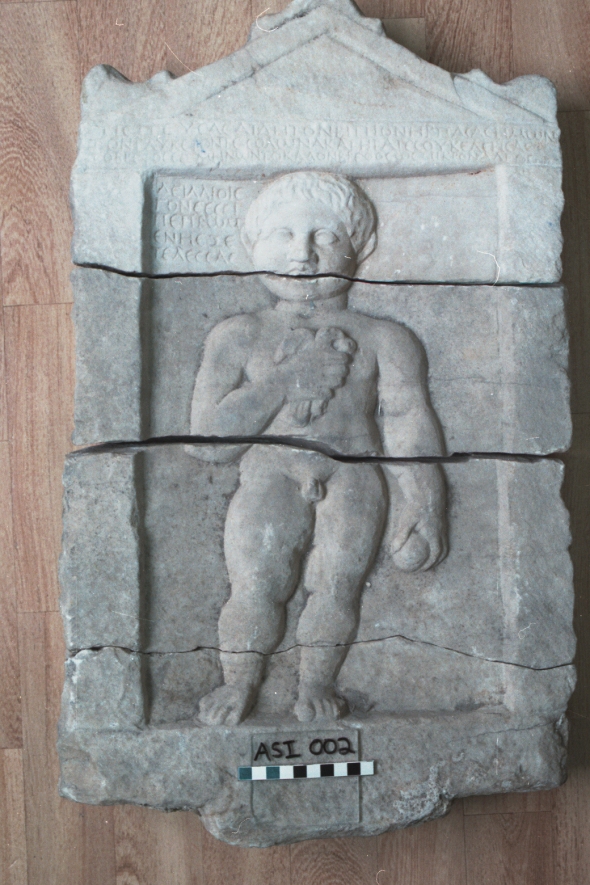 Statia’s stele was erected by her husband as the inscription on the architrave reads: “Tryphon erected the [stele of] Statia Thallousa, on account of her wifely love” (Coulson and Leventi 2001, p. 311).

In addition to those three reliefs, Merlin’s gift included the gable of a sarcophagus (which is fully published by John Oakley in a forthcoming article) and the inscribed base of another funerary stele (ASCSA ASI 4). All these objects date to the Roman Imperial period and once belonged to an extensive cemetery located next to the major road leading from the Diochares Gate to Kephisia. The cemetery was disturbed in later years, and as a result the stelai were removed from their original location. Damascenus was “found lying on one side; from its weight there is no likelihood that it had been moved far,” while Statia and the baby Solon had been built in the walls of two rectangular cisterns.

In the process of looking for their original context, I also grew interested in the modern findspot of the reliefs: the late 19th century mansion and its first owner, Charles Merlin.  Merlin, “the well-known artist and photographer” in Goodell’s article, became the owner of a number of plots opposite the west façade of the Palace through his marriage to Irini Stournari.  In the closing decade of the 19th century he proceeded to build on most of them– very much like a modern real estate developer.

In addition to the large mansion at the corner of Academy and Kephissias Street (Vasilissis Sophias Street today), he also built two more mansions in the neighborhood: one by the corner of Kephissias and Sekeri, the other at the corner of Sekeri and Kanari. The latter is of special interest for the history of the American School because it operated as an upscale boarding house. This is where the majority of the School’s female students and visiting professors lived before Loring Hall and the Palace of Prince George on Academy 18. (The latter was rented by the School from 1923-1929 and I have written about it here: “Living Like Kings: When the Palace of Prince George Was the Annex of the American School of Classical Studies at Athens,” Sept. 1, 2015.)

Known as “Pension Merlin” it was run by an English lady, Mrs. Bessie, who had married a Greek, Mr. Polyanthis (the information comes from one of the letters that Ida Thallon sent to her mother). No longer standing, “Pension Merlin” was described by its various occupants as a luxurious and spacious mansion that could host many individuals, even small families. Ida Thallon and Lida Shaw King, two Vassar graduates and School members in 1899-1900, stayed there during their first year at the School, occupying a suite of rooms and taking most of their meals in the mansion’s dining hall. 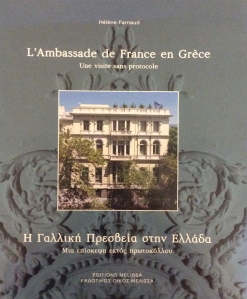 But who was Merlin and why did he choose to donate the archaeological finds to the ASCSA and not to the French School, since he intended to sell the house to the French government, or even to the British School on account of his English and French origins? Not much is known about Merlin junior because he died rather young (at 48), three years after the construction of  the “Hôtel Merlin de Douai,” in 1898. His wife Irini Stournari also died young (1896, the same year his father died.) One thing is for sure. The discovery of Damascenus, Statia, and baby Solon did not bring luck to the Merlins. Merlin kept his photographic studio on the ground floor of “Pension Merlin.” Photography was more a passion than a profession for Merlin, and being rich, he spared no expense equipping his studio with the best cameras.  Not without talent (or perhaps just good connections) he soon became the exclusive photographer of the Greek royal family (Alkis Xanthakis, History of Greek Photography 1839-1970, Athens 2008, pp. 171-173).

Merlin’s brother Sidney, trained as a botanist, is remembered today for introducing a particular orange to Greece: the Washington Navel (aka Merlins).  Their father was the consul Charles Merlin (1821-1896) whose assistance in trading antiquities to the British Museum is the subject of a thorough essay by Yannis Galanakis, titled “On her Majesty’s Service: C.L. W. Merlin and the Sourcing of Greek Antiquities for the British Museum.”  Given his father’s connections with Great Britain and the British Museum, it remains a mystery why Merlin (junior) chose not to donate the reliefs to the British School of Archaeology. Furthermore, from reading Farnaud’s history of the French Embassy in Greece, one understands that Merlin built the “Hôtel Merlin de Douai” with one intention: to sell it to the French. Why didn’t he donate the reliefs to the French School of Archaeology in Athens?

The reliefs did not remain inside the School for long. In the 1920s Damascenus was seen leaning against the wall dividing the American and the British schools. After construction of Loring Hall in 1929, he was transferred, together with the gable of the sarcophagus (ASCSA ASS 38), to the west portico of Loring, while Statia and Solon were displayed on the School’s exterior wall “built into garage-wall in front of school,” as it is recorded on the catalogue card. They probably remained in this position until the construction of the Blegen Library’s New Extension in 1991 when they were transferred to the School’s Antiquities Collection. Today Damascenus continues to gaze over Loring Hall’s porch keeping the School’s students company during lunch and dinner on warmer days of the year.

5 Comments on “The Man from Damascus, the Good Wife, and Baby Solon: R.I.P. at the American School of Classical Studies at Athens”