Judith Robinson Levine has a high fashion design degree from Les Écoles de la Chambre Syndicale de la Couture Parisienne in Paris, France. She worked for 12 years in film and still photography in France as a stylist and a costume designer. Currently, she is a photo stylist specializing in package photography and, in her spare time, she does interior design and a variety of special projects for private clients and non-profits. She lives in Fayetteville, Arkansas with her husband Daniel Levine, Professor of Classical Studies at the University of Arkansas, whom she has assisted during his ASCSA Summer Session directorships in Greece.

In 2008 Daniel and I spent spring semester in Greece. I spent a lot of time in the Archives of the American School of Classical Studies at Athens (ASCSA or School hereafter) researching the history of the School’s Summer Sessions. In studying old logbooks and Annual Reports, I was fascinated by the WW II years and the story of Anastasios Adossides, Administrator and Business Manager of the Athenian Agora Excavations from 1931 to 1942. He and his wife Elie, who was active with the Red Cross, were responsible for making sure that the School was occupied by the Swiss and Swedish Red Cross commissions to Greece during the war; thus they ensured that the School’s property in Kolonaki could never be confiscated by the Germans (Meritt 1984, p. 17).

Jack Davis in an essay titled “The American School of Classical Studies and the Politics of Volunteerism” noted about Adossides and Edward Capps, Chair of the School’s Managing Committee: “The careers of two individuals exemplify the sorts of ties forged between ASCSA members and influential Greek statesmen, and the resulting benefits to the School. The first is Anastasios Adossides (1873–1942), administrator of Samos in 1914–1915, a member of the provisional government of Venizelos in Thessaloniki in 1917, governor of Macedonia in 1918–1919, prefect of the Cyclades and Samos in the early 1920s, and subsequently the business manager of the Athenian Agora and consultant to the ASCSA (1931–1942)… Their personal relationship was valuable to the School during the negotiations between the ASCSA and the Greek government that established the legal groundwork for the inception of excavations of the Athenian Agora in 1931” (Davis 2013, p. 16). Sylvie Dumont in her recent publication of Vrysaki: A Neighborhood Lost in Search for the Athenian Agora (Princeton 2020) has dedicated an entire chapter on Adossides’s role in the expropriation of the land where the ancient Agora once stood (pp. 63-73). 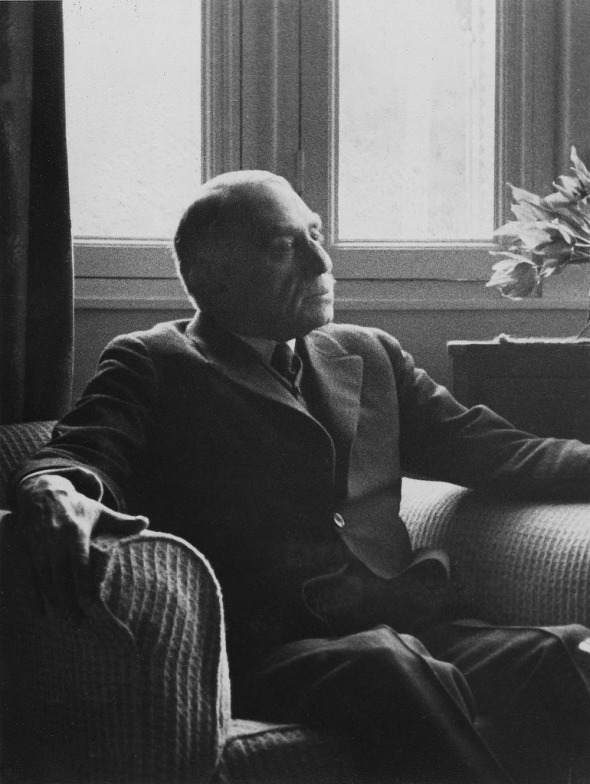 Adossides died in October 1942 during the great starvation that afflicted the city of Athens during the war. His death was reported with great sadness, and it was noted that his very last words to his wife were messages to his successor (lawyer Aristeides Kyriakides) so that this important preservation work might continue. One only needs to read two of the necrologies that his American friends wrote to understand how devastated the School was by his loss (ASCSA Annual Report 1942-43, pp. 15-17; The Philhellene, vol. II, 1942-1943, no. 3-4, p. 3-4.)

The completion of the initial phase of the Agora Excavations followed the reconstruction of the Stoa of Attalos (see also Liz Papageorgiou, “That Unspeakable Stoa“), and the landscaping of the Athenian Agora in the 1950s by the American landscape architect Ralph Griswold; the latter project included the installation of commemorative benches and exedras:

“During that first winter and spring of 1954-55 the modern retaining wall below the Hephaisteion was removed, and earth terraces were restored and planted. The Garden of Hephaistos, the slopes of Kolonos Agoraios, the whole west half of the Agora were planted, and graveled walks with benches (two in memory of Anastasios Adossides and Margaret MacVeagh) at intervals were laid out. General public interest was aroused and maintained by special planting ceremonies. The enterprise had been inaugurated on June 4, 1954 by Their Majesties when King Paul planted an oak and Queen Frederika a laurel beside the Altar of Zeus Agoraios…” (Meritt 1984, p. 189).

Landscaping of the Agora. Boy scouts of Athens and Attica in the yard of the Old Excavation House at 25 Asteroskopeiou Street. Among them H. A. Thompson, J. L. Caskey, and Ralph E. Griswold. The scouts participated in the tree planting program at the Agora, 1955. Source: ASCSA, Athenian Agora Excavations ( 2003.01.0372)

We know about Adossides. But who was Margaret MacVeagh, in memory of whom the second bench was built? Margaret Charlton Lewis (1886-1947) of New York was an alumna of Bryn Mawr College (Class of 1908), and “a serious student of classical languages” according to John Iatrides, who edited and published Ambassador MacVeagh Reports: Greece, 1933-1947 (Princeton 1980). She married Lincoln MacVeagh (1890-1972) in 1917. 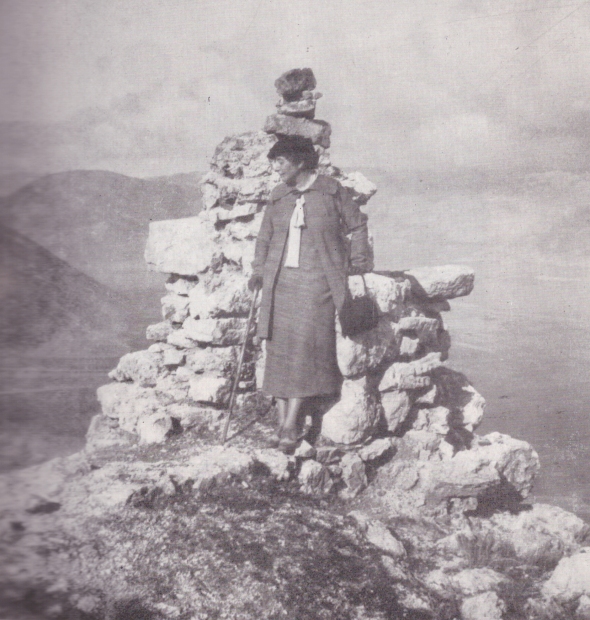 Lincoln (Harvard Class 1913), a personal friend of Franklin Delano Roosevelt and his wife Eleanor, was appointed U.S. Minister to Greece from 1933 to 1941, served as Ambassador to the Greek government in exile in Cairo in 1943-1944, and after Greece’s liberation, was back in Athens as Ambassador from 1944 to 1947. Their daughter Margaret Ewen (Peggy), born in 1920, started learning Greek at the age of nine and not only developed a serious and lasting interest in Greek literature and culture, but also inspired her son, Stuart MacVeagh Thorne, to become an archaeologist (Thorne has participated in many excavations in Greece, including Isthmia, Palaikastro on Crete, and more recently Geraki in Laconia).

Lincoln and his wife Margaret were both accomplished scholars and helped raise funds for the Agora excavations and the American School. They published together “Greek Journey” in 1937, and before that, she had translated and he published George Clemenceau’s American Reconstruction, 1865-1870: And the Impeachment of President Johnson (1928). Lincoln also published a long essay “On the Margins of Greek Tourism” (1939), and ardently fundraised for the restoration of the Lion of the Amphipolis in the 1930s. (For Lincoln MacVeagh’s philhellenism and his involvement with Greek archaeology, see Betsey Robinson’s excellent essay, “The Pride of Amphipolis.”) Margaret died in Athens in 1947 at age 61 and Lincoln left Greece soon afterward. I believe that the bench was a memorial to that good match; in fact, it commemorates the dates of their marriage, 1917-1947.

Ten years later, in April 2018, during our semester off-campus, while walking in the Agora Park, we saw the Adossides bench and I remembered his dedication to preserving the School’s buildings from pillaging during WW II.  A month later, Deputy Director Craig Mauzy was able to secure permission from the Ephorate of Antiquities to clean and recolor the engraved lettering on that bench and also on the one dedicated to Margaret MacVeagh along the steps leading up from the Tholos to the south side of the Hephaisteion, where the Adossides bench stands.

The MacVeagh bench at the Athenian Agora (before and after cleaning the inscription). The inscription reads: MARGARET MACVEAGH | ΜΝΗΜΗΣ ΕΝΕΚΑ | 1917-1947 | LINCOLN MACVEAGH. Photo: Judith Levine.

In May 2018, armed with neutral-PH dish-soap, water, and a toothbrush, I was able to clean the two inscriptions of the dirt, moss, and lichen that had accumulated over the years and then refill the letters with terra-cotta color similar to that which had been used originally in 1954. It was a joy to be able to make a good head start on the renovation of this memorial project. The restoration of the Agora Park benches will continue as time and funds allow.

The Adossides bench (before and after cleaning the inscription) with the Temple of Hephaistos in the background. The inscription reads: ΑΝΑΣΤΑΣΙΟΣ ΑΔΟΣΙΔΗΣ | 1873-1942 | ΜΝΗΜΗΣ ΕΝΕΚΑ. Photo: Judith Levine.

Partial plan of the Athenian Agora with the Temple of Hephaistos on the upper left corner.

Soon after the cleaning operation, I contacted MacVeagh’s grandson, Stuart Thorne, who was kind enough to send me a copy of what appears to be Carl W. Blegen’s handwritten remarks at the dedication ceremony for the MacVeagh bench in 1956 during the 75th-anniversary celebration of the American School of Classical Studies at Athens. Blegen read:

“Just above the Tholos is a stone seat, presented as a memorial for Margaret MacVeagh by her husband Lincoln MacVeagh. Margaret MacVeagh, as those of you who had the privilege of knowing her warm and gracious personality will remember, had a deep-rooted abiding love for Greece, ancient, medieval, and modern. She made many journeys about the country, knew at first hand its people of today, its natural beauties, its flowers, its birds, its legends, its archeological treasures. She took a keen interest in excavations, was at home on the Acropolis, familiar with Mycenae and Tiryns; came twice to Troy and saw some of the many “cities” emerging to view, looked in at Pylos and took part in the actual digging of a tholos tomb.

A friend of the American School and a supporter of its work, she came often to the Agora, following regularly the progress of this great excavation. She liked to stroll about the site and would frequently sit during the sunset hour on the slope below the “Theseum” whence she could look out across the widening expanse of the area under clearance and see the lovely violet glow ascending the side of distant Mt. Hymettus.  As nearly as may be to this favorite vantage point the bench has now been placed. From it may other lovers of Greece find a like enjoyment and satisfaction in close communion with the ancient and modern spirit of this land of Hellas!” 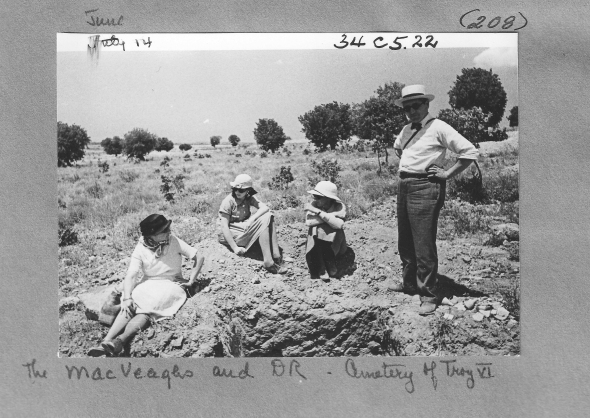 Note
Many thanks to Agora Deputy Director Craig Mauzy, Registrar Sylvie Dumont, and Conservator Maria Tziotziou for advice and facilitation of this collaborative effort, and to Jennifer Hoenig Bakatselou for much-appreciated assistance and encouragement.

9 Comments on “The Agora Benches”