The Magnificent Mayer House: No Such a Thing as a Free Gift

“Following a decision by the Board of Trustees at their November 1997 meeting, the U.S. base for School activities since 1974, was put on the market and sold in May for $5,850,000.” This story appeared in the summer issue of the 1998 ASCSA Newsletter (“Mayer House Sold,” no. 41, p. 4). By then, the U.S. base of the American School of Classical Studies at Athens (ASCSA or School hereafter) had already been transferred to Princeton. That fall I was invited by Catherine Vanderpool, the School’s Executive Director in the U.S., to visit Princeton for two reasons: to meet Homer A. Thompson who was contemplating the idea of leaving his personal papers to the School (which he did) and to examine a large number of boxes containing the administrative records transferred to Princeton after the sale of the Mayer House. Many of the records had been damaged by flooding that precipitated the sale of Mayer House. 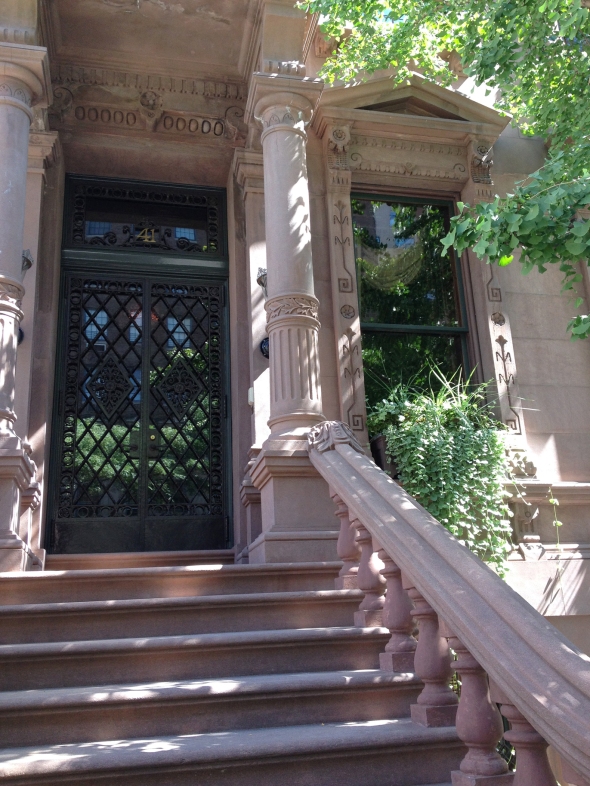 Built in 1882, the four-story brownstone house was one of nine houses on East 72nd Street from no. 39 to 55. The family of Bernhard and Sophia Mayer had moved into the neighborhood in 1899 after purchasing a pair of brownstones in the row at no. 16 and no. 41. (I draw some of this information from the Daytonian in Manhattan, a blog about the architectural history of New York city.) Two family members were later active in New York’s intellectual and academic circles. Albert Meyer (1897-1981), an architect and city-planner, designed many apartment buildings in New York, as well as the master plan of Chandigarh, the new capital of the Indian Punjab. His older sister Clara (1895-1988) was an educator and associated with the New School for Social Research for more than thirty years. She served as Dean of its School of Philosophy and Liberal Arts (1943-1960), and from 1950 to 1962 also as Vice President of its Board. END_OF_DOCUMENT_TOKEN_TO_BE_REPLACED

Anna Apostolaki: A Forgotten Pioneer of Women’s Emancipation in Greece

Vivian Florou here contributes to From the Archivist’s Notebook an essay about Anna Apostolaki, one of the first women to graduate from the University of Athens and in 1926 the first curator of the newly established Museum of Decorative Arts.  Her essay not only sheds light on forgotten aspects of Apostolaki’s life and work but also places this remarkable woman in the cultural milieu of the early decades of the 20th century and at the center of the feminist movement in Greece. Vivian, who studied archaeology and cultural heritage management, co-edited with Natalia Vogeikoff-Brogan and Jack L. Davis, a collection of essays titled Carl W. Blegen: Personal and Archaeological Narratives (Atlanta 2015).

On November 24, 2015, I participated in a workshop at the Benaki Museum titled “A Gift for Anna Apostolaki in Gratitude: Her Life, Work, and Contributions.” My involvement in that event, organized by the Lyceum Club of Greek Women, encouraged me to contribute this short essay to “From the Archivist’s Notebook.” Anna Apostolaki (1881-1958) was an archaeologist and folklorist, the first director of the National Museum of Decorative Arts (now the Museum of Greek Folk Art). As Natalia Vogeikoff-Brogan and Jack Davis taught me, with the application of loving care archives will bloom. Thus the processing of the dozens of disorganized manuscripts in Apostolaki’s personal archives in the Benaki Museum have contributed many pieces to the mosaic that constituted the character of this woman, whom most have forgotten. END_OF_DOCUMENT_TOKEN_TO_BE_REPLACED

Glass “Eye Candy”: A Decorated Window at the American School of Classical Studies at Athens

“In the effort to make this building a credit to American architecture, many well-known American makers and designers took the most lively and liberal interest. Thus, Messrs. J.B. & J.M. Cornell presented the iron staircase extending from cellar to roof… the Belcher Mosaic Glass Company and Mr. W. J. McPherson decorative panels for the outer door, and a beautiful window for the staircase…”

The decorated window at the ASCSA Director’s residence. Click to enlarge

This description is taken from an article published in The American Architect and Building News (AABN) in December of 1889 (no. 728, p. 263), a year after completion of the building destined to house the newly founded (1881) American School of Classical Studies at Athens (ASCSA). In addition to describing the mission and goals of the School, the author drew attention to all the American firms and designers who contributed to the building’s furnishings.  One comes away with the impression  that everything but the stone walls was imported from America.  J.B. & J.M. Cornell presented an iron staircase that still climbs from cellar to roof; the Hopkins & Dickinson Manufacturing Company gave all the necessary hardware; the Sanitas Company contributed plumbing fittings; A.H. Davenport & Company and Norcross Brothers, handsome mantelpieces for the library and the dining room, respectively… and the list goes on.

I have always been fascinated by the tall, exquisite window that looms over the first landing in the white marble staircase that leads from the ground floor to the first floor of the Director’s residence. It was once rumored to be a Tiffany creation, but in Louis Lord’s History of the American School, written more than fifty years after the construction of the building, McPherson was credited as the donor–“…and from Mr. W. J. Macpherson a fine decorated window for the main staircase” (1947, p. 29). One suspects that Lord was drawing his information from the AABN article, but it puzzles me why he did not also credit the Belcher Glass Mosaic Company, since in that place the decorated glassworks of the School’s building had been attributed to both Belcher and McPherson. END_OF_DOCUMENT_TOKEN_TO_BE_REPLACED