To Know One’s Country as a Foreign Land

I have always found informal travel accounts fascinating. By informal, I mean accounts found in personal diaries or letters. Occasionally, they are published posthumously by the writer’s relatives (usually for family consumption) and attract little attention because of their mundane nature. Until recently, such letters and diaries of anonymous folk were avoided by historians who considered their content subjective or inaccurate. After all, why use the private diary of an American expatriate in Greece as a source, when the event (e.g., a local revolution) was described in more detail in the newspapers or other official reports?

I, on the other hand, pay particular attention to these types of publications because they provide valuable information, otherwise undocumented, about the level of local awareness, participation or aloofness within foreign communities. Gilbert K. Chesterton (1874-1936), an English writer and philosopher, once said that “the whole object of travel is not to set foot on foreign land: it is at last to set foot on one’s own country as a foreign land.” It’s the second part of Chesterton’s comment that makes me delve into the travel accounts of foreigners-mostly Americans in my case–who have experienced Greece as a foreign land. Here I am not interested in the tourist but instead the engaged traveler, the expatriate, or, in rare cases, the committed immigrant (that is the foreigner who has almost “gone native”).

My latest source of inspiration for getting “to know my country as a foreign land” is a privately published collection of letters which came to my attention after a visit to the newly established Archives of the American College of Greece. There, Dr. Demetra Papakonstantinou, an accomplished archaeologist who now serves as the College’s Archivist, graciously shared with me a copy of a book titled Odyssey of a Learning Teacher (Greece and the Near East 1924-1925). Published in 2005 by David L. Aronson, the book contains transcriptions of the letters that his mother, Charlotte Eleanor Ferguson, a graduate from Mount Holyoke College and a teacher at the American College for Girls (what is now Pierce College), sent to her family in 1924-25. (The original letters are now part of the American School of Greece Archives.)

END_OF_DOCUMENT_TOKEN_TO_BE_REPLACED

A day does not go by in the Archives of the American School of Classical Studies at Athens (ASCSA) without an inquiry about the Heinrich Schliemann Papers. More than one third of the collection has been digitized and made available for research online; still, these inquiries keep coming from all over the world, including destinations as remote as Japan and Cuba.  Though unquestionably a legendary figure, Schliemann’s popularity is largely due to the richness of his personal archive, which remains an inexhaustible source of information for a wide range of audiences: historians, archaeologists, fiction and non-fiction writers, even film producers. (I have written about Schliemann before [Schliemann of Troy: The Story of a Linguistic Genius] and have hosted two posts by Curtis Runnels [Who Went to Schliemann’s Wedding? and, “All Americans Must Be Trojans at Heart”: A Volunteer at Assos in 1881 Meets Heinrich Schliemann], the author of The Archaeology of Heinrich Schliemann: An Annotated Bibliographic Handlist [2007].)

To the rich list of books and articles that have been written about Schliemann I would like to add the recent publications by Umberto Pappalardo, who has been studying Schliemann’s activities in Napoli and on the island of Motya, and Massimo Cultraro’s new book with the sibylline title L’ ultimo sogno dello scopritore di Troia: Heinrich Schliemann e l’ Italia (1858-1890). Before them, in 2012, Elizabeth Shepherd published a comprehensive article about Schliemann’s wanderings in Italy in the fall/winter of 1875, especially his interest in the site of Populonia. Schliemann travelled to Italy seven times, first as a tourist (1858), and later, especially after the discovery of Troy (1871-1873), as a celebrity and potential excavator. He even drew his last breath in the streets of Naples one morning in December 1890. Yet, until recently, Schliemann’s Italian days remained understudied. END_OF_DOCUMENT_TOKEN_TO_BE_REPLACED

Touring the Balkans with the Ladies of Ploutarchou 9

Jack L. Davis, Carl W. Blegen Professor of Greek Archaeology at the University of Cincinnati and a former director of the American School of Classical Studies at Athens (2007-2012), here writes about women travelling alone through the western Balkans in the late 1930s, on the eve of WW II.

The second half of the 19th century saw the advent of mass tourism in the Mediterranean and Balkans. Despite a few blips (e.g., the Dilessi Murders in 1870 that resulted in the death of three Englishmen and an Italian at the hands of brigands; J. Gennadius, Notes on the Recent Murders by Brigands in Greece), travellers could be reasonably certain of their personal safety. Their passage was also facilitated by travel brokers and books of advice for tourists.  Thomas Cook tours began in Greece in 1868. The Baedeker guide for Greece was published in 1889 while and Murray’s Handbook for Travellers in Greece was already in its 7th edition by 1880.

Group and individual tourism became ever more common and secure.  American students in Greece experienced violence only on three occasions. In 1872 John Williams White, first chairman of the Managing Committee of the ASCSA, was the target of an attempted kidnapping. In 1886 University of Michigan student Walter Miller was commissioned a captain in the Greek army, so that he could hunt down his assailants. Only once did lawlessness end in death, in 1925 when John Logan was shot in Aitolia by attackers who fired on members of the American and British schools, in an apparent case of misidentification (http://www.ascsa.edu.gr/pdf/uploads/ASCSA-1882-1942.pdf, p. 179).

Since the late 19th century trips for the students of the ASCSA had been institutionalized, with a Peloponnese and an island trip led by Wilhelm Dörpfeld.  The Peloponnese trip was considered too rough for women, although the first woman member of the School (1885-86), Annie Smith Peck, travelled extensively there with friends. Several of the School’s female students would also hire Angelis Kosmopoulos (foreman for many excavations, including Olympia and Corinth) and his son George (later the husband of Alice Leslie Walker), as guides for their travels throughout Greece.

The more northern reaches of the Balkans began to attract tourists, including women travellers, a bit later than Greece, and there was an explosion of women travel writers there and elsewhere in the late Victorian period (http://www.womeninworldhistory.com/essay-07-07.html).

END_OF_DOCUMENT_TOKEN_TO_BE_REPLACED

Athens at the Turn of the Century: A Sentimental Capital and a Resort of Scholars

On February 17, 1901, a young American archaeologist and member of the American School of Classical Studies at Athens (ASCSA or the School hereafter) was “roaming over the city in search of Mr. Kavvadias, the general ephor of antiquities in Athens, in order to get a permit to begin work at Vari tomorrow” (letter of Charles H. Weller to his wife).  Together with a small group of students from the School, he had conceived of the idea of conducting a small excavation at the Vari Cave on the southern spur of Mount Hymettus, near the ancient deme of Anargyrous. Known since the 18th century, the cave had been visited and described by several European travelers who were particularly taken by the reliefs and inscriptions carved on its walls. 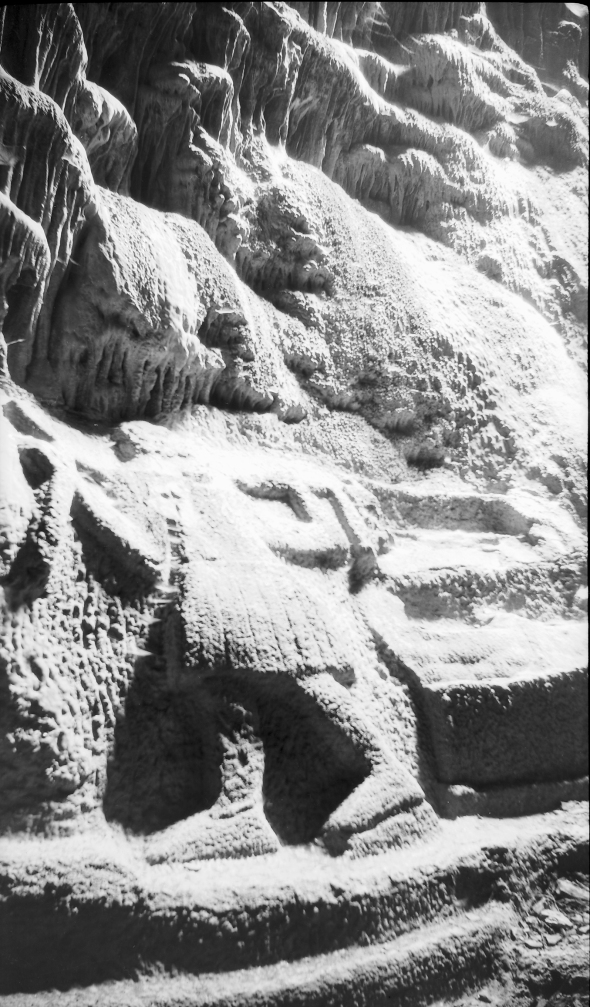 END_OF_DOCUMENT_TOKEN_TO_BE_REPLACED

Expat Feasts in Athens on the Eve of the Balkan Wars 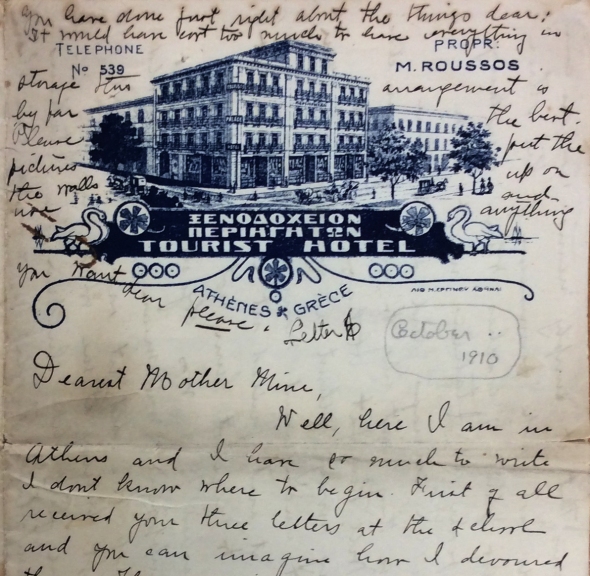 One of Zillah Pierce Dinsmoor’s letters to her mother, October 1910.

“Maybe I asked you before, but will you save all my letters, dear, for I may want to use some of the material in them” Zillah Pierce Dinsmoor (1886-1960) reminded her mother a month after her arrival in Greece (Oct. 20, 1910). And because Emma Pierce respected her daughter’s wish, a valuable collection of private correspondence describing the daily life of a young American bride in Athens in the early 20th century has been preserved in the Archives of the American School of Classical Studies at Athens (ASCSA).

This is the second time From the Archivist’s Notebook features an essay about Zillah Dinsmoor.  In February 2014, guest author Jacquelyn Clemens published an account of Zillah’s Greek experience, mining information from her letters. “Students and scholars who study at the American School… have often been accompanied by their spouses, significant others, and children who live with them here in Athens. In the early 20th century, Zillah Pierce Dinsmoor was one of these women who traveled to Athens along with her husband, architect William Bell Dinsmoor” wrote Clemens in her introductory paragraph. (Read J. Clemens,”Letters from a New Home. Early 20th Century Athens Through the Eyes of Zillah Dinsmoor“)  Barely 24 years old (and away from home for the first time), this fashionable young woman from Massachussets wrote long letters once a week to her mother about her new life in Athens. END_OF_DOCUMENT_TOKEN_TO_BE_REPLACED