Is this Julia Ward Howe?

Curtis Runnels, Professor of Archaeology at Boston University and an expert in Palaeolithic archaeology in Greece, and his wife Priscilla Murray, an anthropologist and Classical archaeologist, here contribute to From the Archivist’s Notebook a story about the purchase of a miniature portrait of an elegant, young woman in an antique fair, their research to identify both the subject of the portrait and its creator, and, finally, their thrilling discovery.

Even from a distance, the small portrait of a beautiful young woman had a commanding presence. We bought the miniature watercolor on ivory (less than 10 by 8 cm) at an antique fair in Holliston, a town near Boston, Massachusetts, because the sitter was dressed a la Gréque with a Greek column in the background. The quality of the painting, which points to a very accomplished miniaturist, together with the appearance and accoutrements of the subject, suggest that the painting was an important commission by a socially prominent person. We loved the painting, and of course, we were intensely interested in the identity of the young woman.

END_OF_DOCUMENT_TOKEN_TO_BE_REPLACED

As a young woman, Hazel Dorothy Hansen broke several glass ceilings. From a humble background –her father was a foundryman—she was admitted to Stanford University in 1916, at a time when the institution had severely limited the admission of women. In 1904, Mrs. Stanford became afraid of the increasing number of women enrolling at Stanford (by 1899 reaching almost 40% of the student population) and implemented a quota that restricted their numbers at the undergraduate level: for every woman at Stanford, there had to be three men. (See Sam Scott, “Why Jane Stanford Limited Women’s Enrollment to 500,” Stanford Magazine, Aug. 22, 2018.). Fortunately for a girl of modest means, Stanford remained tuition-free until 1920.

She broke the glass ceiling again when she chose a prehistoric topic for her dissertation (“Early Civilization in Thessaly”) that also required extensive surveying for sites on the Greek periphery.  In the 1920’s female graduate students at the American School had limited options when it came to field research. Apart from Alice Leslie Walker, who had been entrusted with the publication of its Neolithic pottery, Corinth remained a male domain, with Bert Hodge Hill and Carl W. Blegen controlling access to, and publication of, archaeological material. Hazel would have needed either to finance her own excavation, as Hetty Goldman and Walker had done in the 1910s, or to write an art history thesis based on material in museums. It was not until David R. Robinson began excavations at Olynthus and Edward Capps spearheaded the Athenian Agora Excavations that women were allowed to participate in the publication of (secondary) excavation material.

Hansen’s monthly report (March 1924) to the School’s Director, where she lists her trips, and also proudly claims that she discovered the prehistoric site of Μαγούλα Παλιάμπελα (“and not even mentioned by Mr. Wace”). ASCSA Archives, AdmRec 108/1, folder 5.

END_OF_DOCUMENT_TOKEN_TO_BE_REPLACED

The following day the three women and George drove with a “sousta” (a kind of carriage) to ancient Sicyon to see the ancient theater. On the way back they “persuaded George to sing to us… His grandfather had been in close attendance to Kolokotronis and his pride in the songs was splendid to see. He was very anxious that we should understand all the words in the songs, and assured us over and over again that the circumstances were really historical… George had the remains of a fine voice, and to hear a patriot, full of pride in his songs, sing them in his own country, in the moonlight, was an experience worth having” (Conway 1917, pp. 39-40). END_OF_DOCUMENT_TOKEN_TO_BE_REPLACED

Jack Davis made his debut as an intellectual historian and historiographer in 2000 when he published “Warriors for the Fatherland: National Consciousness and Archaeology in ‘Barbarian’ Epirus and ‘Verdant’ Ionia, 1912-1922” (Journal of Mediterranean Archaeology 13:1, 2000, pp. 76-98).  Following “Warriors,” he published more than twenty essays of historiographical content in journals, collected volumes, and online platforms.  Today I have chosen to review the ones that, in my opinion, offered counter-narratives challenging the institutional habitus of American archaeology in Greece. END_OF_DOCUMENT_TOKEN_TO_BE_REPLACED 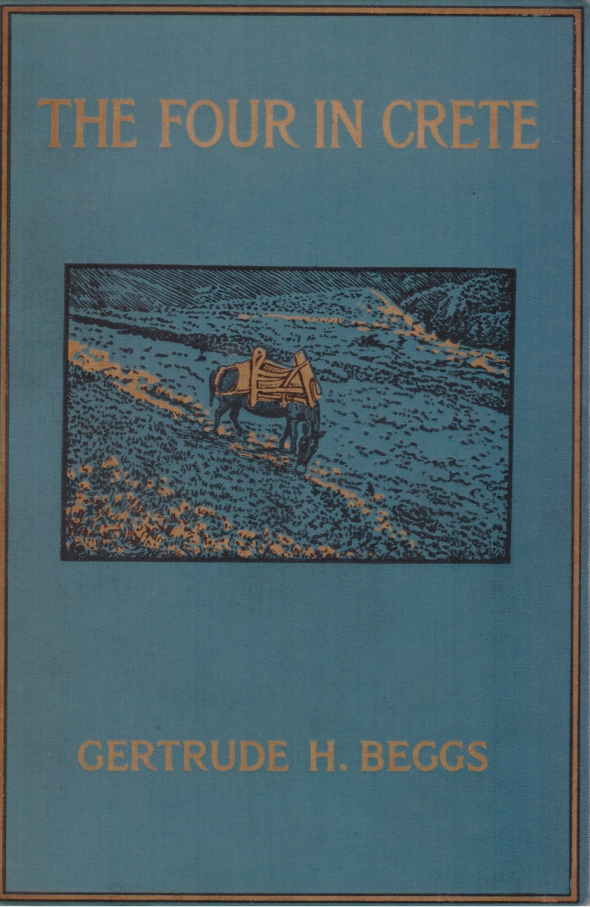 Gertrude Harper Beggs’s The Four in Crete, published in 1915 (New York: Abingdon Press), tells the story of four traveling companions identified only by nicknames: the Western Woman, the Coffee Angel, the Scholar and the Sage. The narrative begins and ends in Athens, but otherwise focuses on their journey to archeological sites on Crete, which at the time of their visit was not yet technically part of Greece. Beggs employs some standard devices of travelogues of the era. She illustrates the rigors and exoticism of travel through amusing reports of sea sickness, flea infested bedding, and the anxieties of the customs house. END_OF_DOCUMENT_TOKEN_TO_BE_REPLACED