The Riding Goddess of Mycenae

“In the summer of 1954, while Dr. Papademetriou and I were investigating the new Grave Circle of Mycenae, we removed the fill to the south of that circle; it proved to have been the dump of a previous excavation. Its position seems to indicate that in all probability it was made up of earth removed either by Mme Schliemann or by Tsountas from the dromos of the Tomb of Clytemnestra. Among other objects found in this earth were two carved gems, one of which bears the figure of an animal, and the other a design not only interesting for its excellence of its workmanship but also important because of the subject represented,” wrote archaeologist George Mylonas in the introduction of his book Ancient Mycenae: The Capital City of Agamemnon (Princeton 1957). 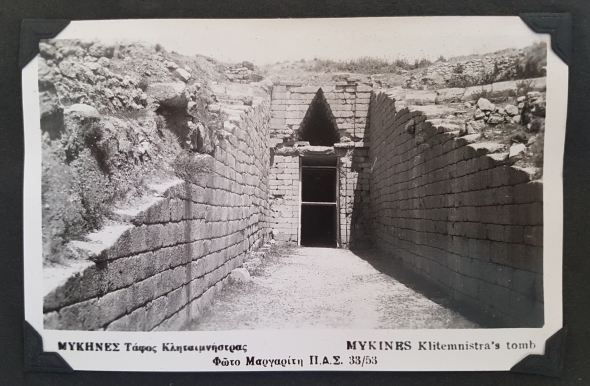 The Accidental Discovery of Grave Circle B

The Tomb of Clytemnestra had been robbed by Veli Pasha, the Ottoman Governor of the Morea, in the early 19th century; he had, however, missed the dromos. Years later, in 1876, it was cleared by Sophia Schliemann, while her husband Heinrich was digging the shaft graves of Grave Circle A. The Tomb was properly excavated by Christos Tsountas in 1897, who conducted excavations at Mycenae from 1886 until 1902. After WW II, the Greek Archaeological Service undertook the restoration of the Tomb of Clytemnestra, which, by then, was falling apart and needed urgent care. The restoration, which started in the spring of 1951, was completed by the fall of that year. END_OF_DOCUMENT_TOKEN_TO_BE_REPLACED