To Know One’s Country as a Foreign Land

I have always found informal travel accounts fascinating. By informal, I mean accounts found in personal diaries or letters. Occasionally, they are published posthumously by the writer’s relatives (usually for family consumption) and attract little attention because of their mundane nature. Until recently, such letters and diaries of anonymous folk were avoided by historians who considered their content subjective or inaccurate. After all, why use the private diary of an American expatriate in Greece as a source, when the event (e.g., a local revolution) was described in more detail in the newspapers or other official reports?

I, on the other hand, pay particular attention to these types of publications because they provide valuable information, otherwise undocumented, about the level of local awareness, participation or aloofness within foreign communities. Gilbert K. Chesterton (1874-1936), an English writer and philosopher, once said that “the whole object of travel is not to set foot on foreign land: it is at last to set foot on one’s own country as a foreign land.” It’s the second part of Chesterton’s comment that makes me delve into the travel accounts of foreigners-mostly Americans in my case–who have experienced Greece as a foreign land. Here I am not interested in the tourist but instead the engaged traveler, the expatriate, or, in rare cases, the committed immigrant (that is the foreigner who has almost “gone native”).

My latest source of inspiration for getting “to know my country as a foreign land” is a privately published collection of letters which came to my attention after a visit to the newly established Archives of the American College of Greece. There, Dr. Demetra Papakonstantinou, an accomplished archaeologist who now serves as the College’s Archivist, graciously shared with me a copy of a book titled Odyssey of a Learning Teacher (Greece and the Near East 1924-1925). Published in 2005 by David L. Aronson, the book contains transcriptions of the letters that his mother, Charlotte Eleanor Ferguson, a graduate from Mount Holyoke College and a teacher at the American College for Girls (what is now Pierce College), sent to her family in 1924-25. (The original letters are now part of the American School of Greece Archives.) 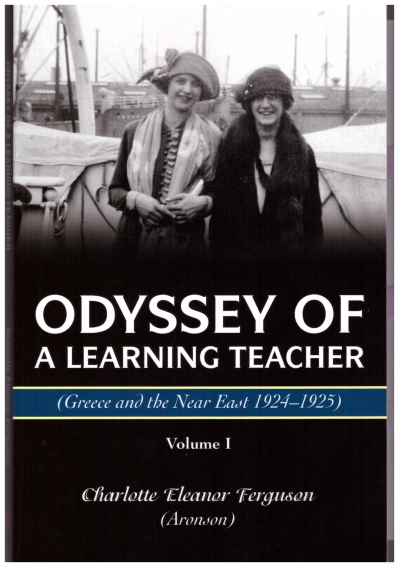 END_OF_DOCUMENT_TOKEN_TO_BE_REPLACED

De Jong’s caricature of Goldman depicts her “holding a Neolithic pot of which she was particularly proud. The object behind Hetty’s head is a seated archaic statue found up in a Roman villa which was excavated at some distance from the mound [of Eutresis]… There is the mound itself surmounted by the shelter to protect the diggers from the heat of the sun… The horse, Kappa, on the road below the hill to the right draws the cart containing Hetty herself, Hazel [Hansen], Dorothy [Thompson] and Mitso the driver, on their way to work… a sailing boat or caique refers to the expedition organized by the foreman, George Deleas, to try and row across the Gulf of Corinth from Creusis, the harbor settlement of Eutresis.  On the left of the picture at the foot of the mound two village girls with long plaits carry on their heads baskets of washing… Below them is a temple which probably refers to classical architectural findings at Hetty’s previous dig at Halae…” (Hood 1998, p.51). END_OF_DOCUMENT_TOKEN_TO_BE_REPLACED