“A Greek Author Travels to the Country of the New Myth”: The Voyage of Elias Venezis to America in 1949

This essay comprises the text of a talk that I presented in the Cotsen Hall auditorium of the American School of Classical Studies at Athens (ASCSA), April 9, 2013, at an evening devoted to novelist Elias Venezis, whose papers reside in the Archives of the Gennadius Library. The text was also published (in Greek ) in the “Athens Book Review,” in an issue dedicated to Venezis. Since my essay discusses two of Greece’s most important novelists’ impressions from their journeys to America, I thought that it also deserved to be published in English and be made available to an American audience (here, I must thank my friend and former colleague Stefanie Kennell for her wonderful translation). For half of my life I have studied and worked in a Greek-American environment; there interest lies in examining how foreigners (usually described as philhellenes) perceive(d) Greece, and it is rarely discussed, at least in the broader community of the American School, how Greeks experienced America at critical times, such as in the first decade following WW II. The two authors, Elias Venezis and Yiorgos Theotokas, traveled in America during the period of the Marshall plan and the beginning of the Cold War, just before strong anti-Americanism began developing in Greece. For both, the voyage to America was a journey to a mythical land — as implied by the title of this essay, which is drawn from the title of a talk (“Ένας Έλλην συγγραφεύς στη χώρα του νέου μύθου”) that Venezis delivered at the Greek American Cultural Institution in 1950, immediately after his return from America. 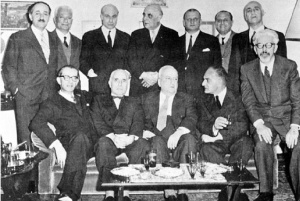 For those who are not familiar with Modern Greek Literature, I should also add a few remarks about the so-called literary “Generation of the Thirties.” As commonly employed, this term describes a group (all male) of novelists, poets, and artists, who came of age in the 1930s. These men continued to be very productive and influential in the following three decades, to the point that a myth with regenerative power was built around them, one that still aspires and inspires (Leontis 2013). Nobel-prize laureate poets Yiorgos Seferis and Odysseus Elytis, novelists Angelos Terzakis, Stratis Myrivilis, Elias Venezis and Yiorgos Theotokas, are some of the most accomplished and distinguished “members” of the “Generation of the Thirties.” The personal papers of most of them have been deposited in the Gennadius Library of the American School. 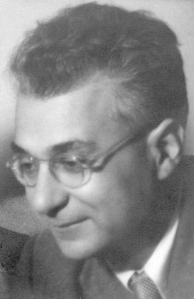 In 2009, at an event devoted to Yiorgos Theotokas and the republication of his Essay on America, I was introduced to Greek travel literature about America. Theotokas was among the first writers of the so-called “Generation of the Thirties” who visited America a few years after the end of World War II. While taking receipt of Elias Venezis’s personal papers in 2010, I came upon the manuscript of Land of America and then, in discussions with the author’s daughter, Anna Venezi Kosmetatou, I was made aware of the fact that Venezis was actually the first of the famous “Generation of the Thirties” to travel to the U.S., in 1949.

Except for Theotokas’ Essay on America (Δοκίμιο για την Αμερική), which had the good fortune to be re-published a few years ago, travel writing of this type is difficult or impossible to find on the shelves of Athenian bookstores. When I looked for Land of America at a well-known bookstore in downtown Athens, clerks told me that it was the first time they had heard that Venezis had written a book of this sort. Perhaps this is because, in the age of globalization, trips to America have lost some of the magic and myth that used to surround them. Already in the 1970s, as Vassilis Lambropoulos writes, “with the spread of cinema and even more the advent of television in Greece, travel writing is losing its primary function and sparkle. The public does not need the guidance of an eyewitness to get to know foreign countries.” 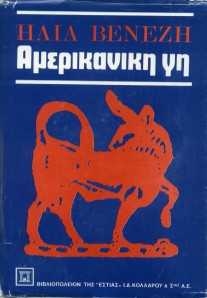 Unlike the other writers and intellectuals who visited the U.S. in the 1950s and 1960s, Venezis began his long journey without the support of the American government. The famous program of cultural exchanges sponsored by the the U.S. Information and Educational Exchange Act of 1948, popularly known as the Smith-Mundt Act, does not seem to have been implemented immediately in Greece. What is certain is that Elias Venezis and his wife either did not know about or did not expect American government support when they decided in the summer of 1949 to cross the Atlantic. On the opposite shore was Venezis’s brother, Thanos Mellos and his wife, the mezzo-soprano Eleni Nikolaidi, who had settled there just a year before.

Thanos Mellos wrote to his brother Elias and his wife on May 6, 1949, from New York: “I’ve told Elias that a place has been confirmed for his trip to America on a merchant ship that sails from a port in France. Perhaps there’s a way he can embark even from Greece. The trip won’t cost a cent. The steamship owner’s a friend of ours, and he’s offering it to us for free. You only have to get your papers ready, Elias, and send me a telegram.” END_OF_DOCUMENT_TOKEN_TO_BE_REPLACED