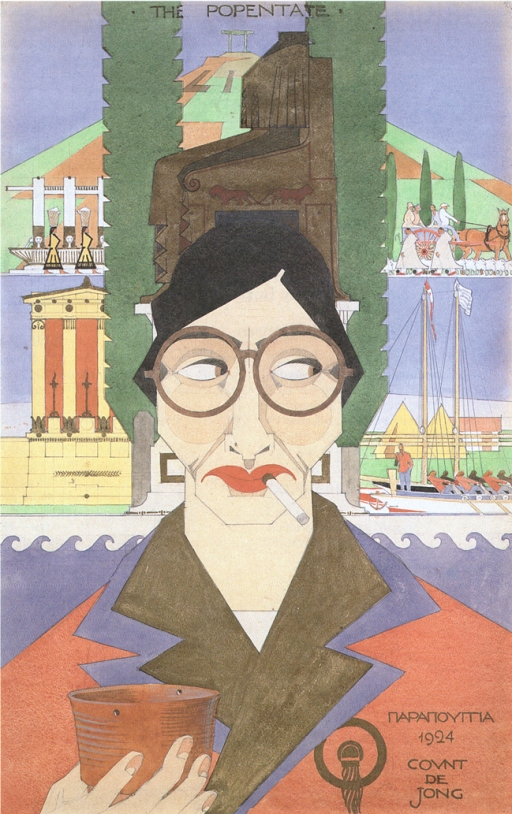 De Jong’s caricature of Goldman depicts her “holding a Neolithic pot of which she was particularly proud. The object behind Hetty’s head is a seated archaic statue found up in a Roman villa which was excavated at some distance from the mound [of Eutresis]… There is the mound itself surmounted by the shelter to protect the diggers from the heat of the sun… The horse, Kappa, on the road below the hill to the right draws the cart containing Hetty herself, Hazel [Hansen], Dorothy [Thompson] and Mitso the driver, on their way to work… a sailing boat or caique refers to the expedition organized by the foreman, George Deleas, to try and row across the Gulf of Corinth from Creusis, the harbor settlement of Eutresis.  On the left of the picture at the foot of the mound two village girls with long plaits carry on their heads baskets of washing… Below them is a temple which probably refers to classical architectural findings at Hetty’s previous dig at Halae…” (Hood 1998, p.51). END_OF_DOCUMENT_TOKEN_TO_BE_REPLACED

She was twenty-four years old and had come to Greece the year before, to study at the American School of Classical Studies at Athens (ASCSA or the School hereafter). Before that, she had lived in Philadelphia and studied at Bryn Mawr College. After attending the year-long program of the ASCSA, she and Hazel Hansen, another student of the School, were invited by archaeologist Hetty Goldman to dig at the Neolithic site of Eutresis, not far from Thebes, in Boeotia. END_OF_DOCUMENT_TOKEN_TO_BE_REPLACED