Dylan Rogers holds a PhD from the University of Virginia, and he has been Assistant Director at the American School of Classical Studies at Athens since 2015. The essay he contributes to “From the Archivist’s Notebook” was inspired by his summer experience at the School.

“Summers at the ASCSA are a vibrant time for the School, full of students and scholars, with the buzz of activity and chats at Ouzo Hour. Taking on the role of the Assistant Director of the School last year, I was intrigued to learn that each Summer Session Director is given the title, “Gertrude Smith Professor.” At first, I was only vaguely familiar with Smith’s scholarship on Greek law. So, why would the School associate SS Directors with her? This led me on a quest to find out more about Smith—and to find out what her story exactly was. She must have had a passion for Greece, but why? And in what ways did she spread this love to others?” 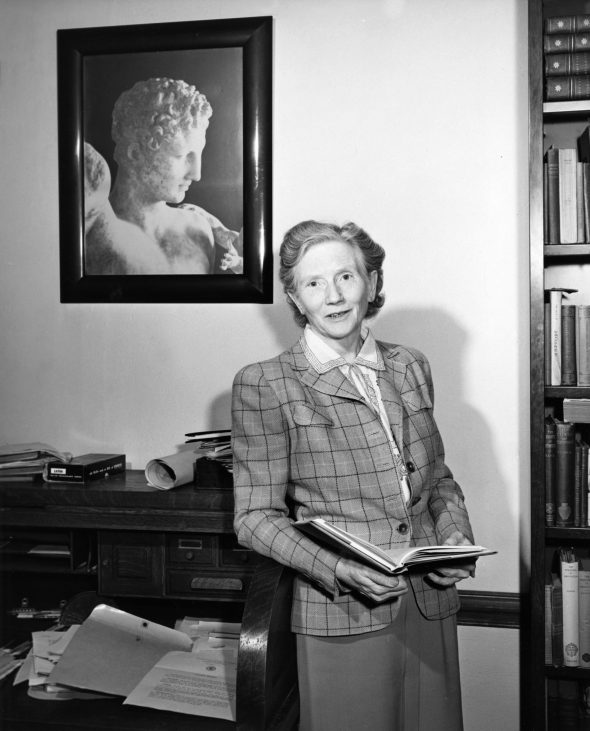 Gertrude Elizabeth Smith (1894-1985) spent most of her adult life in Illinois. Born and raised in Peoria, Smith would later go on to receive her education at the University of Chicago, writing a PhD dissertation on Greek law– after which Smith would begin teaching at the university, eventually becoming the Edwin Olson Professor of Greek in 1933. From 1934 until her retirement in 1961, Smith was the Chairman of the Department of Classics at Chicago, making her a prominent female figure in the field of Classics in America in the 20th century. Smith also served as a founder of Eta Sigma Phi, the national Classics honor society, was the first woman to serve as the president of both the Classical Association of the Middle West and South (CAMWS, 1933-1934) and the American Philological Association (1958), and was a long serving member of the editorial board of the journal, Classical Philology (1925-1965). After her retirement from Chicago, Smith would go on to teach briefly at the University of Illinois, Loyola University in Chicago, and Vanderbilt University (Gagarin 1996-1997). END_OF_DOCUMENT_TOKEN_TO_BE_REPLACED

“Dollars and Dreams”: American Archaeologists on the Hunt for Greek American Money in Chicago 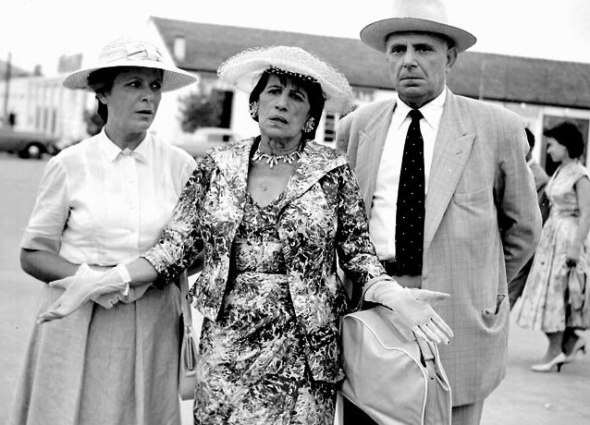 A still from The Aunt from Chicago (Η θεία από το Σικάγο) with the eccentric Greek American aunt (played by Georgia Vasileiadou) in the middle.

The Aunt from Chicago is one of the most beloved films in the history of Greek cinema. Produced in 1957, it became an instant hit and remained in demand for many decades. The movie had all the ingredients of a successful production: a great set and superior performances by the best actors of its time. As much as the film is a satire on the conservatism of the Greek family, it is also a subtle mockery of the “aunt’s” Americanization.

Proud of their successful relatives in America, but also feeling uncomfortable with their rapid assimilation by American culture, Greek intellectuals such as novelists Elias Venezis and Yorgos Theotokas tried to rationalize the loss of national identity by the Greek migrants.  If, before WW II, stories of hardship and suffering prevailed over stories of success, after the war America’s new supremacy left little room for a narrative of failure. Instead, a new transnational narrative wanted Greek migrants — with their age-old values and in light of the bravery they had demonstrated during the war — to have contributed to the building of a new America. Novelist Yorgos Theotokas in his Essay on America (Δοκίμιο για την Αμερική), in the wake of a visit to the United States in 1953, would go so far as to claim that “From now on, the American people will be—to a small, but considerable extent—descendants of Greeks also” (Laliotou 2004, p. 86). (For a thorough study of the Greek migration in America, see Ioanna Laliotou, Transatlantic Subjects: Acts of Migration and Cultures of Transnationalism between Greece and America, Chicago 2004.)