Clayton M. Lehmann, Professor of History at the University of South Dakota, here contributes an essay about American college students coming to Greece, as part of study-abroad programs. This post represents a modified and shortened version of the 63rd Annual Harrington Lecture, which he delivered 28 October 2015 to the College of Arts and Sciences of the University of South Dakota.  Lehmann was a Regular Member of the American School of Classical Studies at Athens in 1982/3, lived in Greece while he wrote his doctoral dissertation, and has returned often, three times as the Director of the Summer Session for the American School and regularly since 2005 as one of the professor-captains of the University of South Dakota’s short-term faculty-led study-abroad program “The Isles of Greece!”.

After disappointing tourism numbers for the 2004 Olympics, the Greek National Tourism Organization launched a major campaign, “Live Your Myth in Greece,” to rekindle Greece in the world’s imagination.  When a group of my students arrived in Athens in 2005 for the study-abroad program The Isles of Greece!,[1] they saw the advertisements for this campaign on the billboards and buses on the way into the city.  At first glance, the images appeal to the typical touristic expectation of the Greek quartet of sea, sun, sand, and sex.  But the classical architecture and supernatural figures suggest a more complex imaginary mix.  The fine print on some of these posters read:

Greece: a land of mythical dimensions. Where the spirit of hospitality welcomes you as a modern god. And the siren song draws you into its deep blue waters. Where a gentle breeze through ancient ruins seems to whisper your name. And a dance until dawn can seem to take on Dionysian proportions. In Greece the myths are still very much alive. And in amongst them sits your own . . . patiently waiting for you to live it. Live your myth in Greece.  Ask your travel agent. 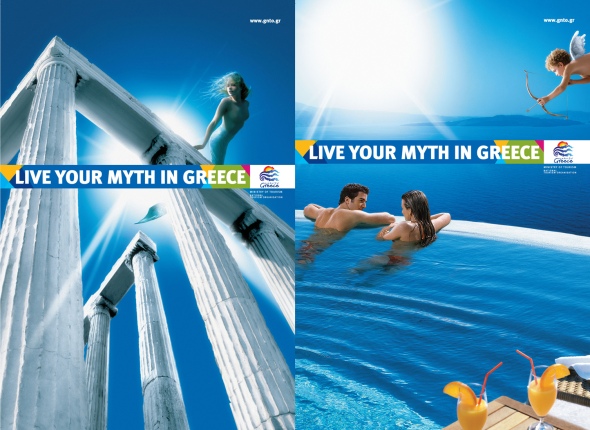