“Islands and coast Asia Minor still crowded with refugees. Stop. Number there still to be repatriated estimated three hundred thousand. Stop. We are maintaining three stations in Mytilene district clothing alone being available, but food urgently needed.  Stop. Above statements based on personal inspection this Commission. Stop. We recommend that work in Aegean be immediately extended to other islands like Chios, Samos and to opposite coast which can be reached by sea transport which can be secured by Greek governments. Stop.”

The text quoted above is a small portion of a long telegram (47 lines) that Colonel Edward Capps sent to Harvey D. Gibson, member of the American Red Cross War Council in Paris, on December 12, 1918 (NACP, Greece, ARC Commission to, 964.62/08). The telegram reported the activities of the American Red Cross (ARC hereafter) since arrival of its Greek Commission in Athens on October 23rd. 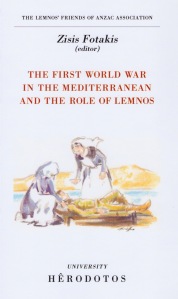 This is not the first time I am writing about the activities of the ARC in Greece. In 2011, together with Jack L. Davis, then Director of the American School of Classical Studies at Athens (ASCSA or the School hereafter), we organized and subsequently published the proceedings of a conference titled Philhellenism, Philanthropy, or Political Convenience: American Archaeology in Greece (Princeton 2013). Davis’s paper, “The American School of Classical Studies and the Politics of Volunteerism,” discussed the involvement of members of the ASCSA, through enlistment in the Greek Commission of the ARC, in humanitarian aid in eastern Macedonia, as well as in the repatriation of Greek citizens who had been taken as hostages to Bulgaria. Later in 2015, on the occasion of the centenary of the Battle of Gallipoli, I was invited to participate in a conference about The First World War in the Mediterranean and the Role of Lemnos, with a paper that discussed the humanitarian activities of the ARC Greek Commission in the eastern Aegean at the end of the Great War. END_OF_DOCUMENT_TOKEN_TO_BE_REPLACED