De Jong’s caricature of Goldman depicts her “holding a Neolithic pot of which she was particularly proud. The object behind Hetty’s head is a seated archaic statue found up in a Roman villa which was excavated at some distance from the mound [of Eutresis]… There is the mound itself surmounted by the shelter to protect the diggers from the heat of the sun… The horse, Kappa, on the road below the hill to the right draws the cart containing Hetty herself, Hazel [Hansen], Dorothy [Thompson] and Mitso the driver, on their way to work… a sailing boat or caique refers to the expedition organized by the foreman, George Deleas, to try and row across the Gulf of Corinth from Creusis, the harbor settlement of Eutresis.  On the left of the picture at the foot of the mound two village girls with long plaits carry on their heads baskets of washing… Below them is a temple which probably refers to classical architectural findings at Hetty’s previous dig at Halae…” (Hood 1998, p.51). END_OF_DOCUMENT_TOKEN_TO_BE_REPLACED

Two Academics “Ruin” the Spirit of Valentine’s Day: A Response to “My heart is beating.”

Emily Egan and Jack Davis, two “over-intellectuals” from the University of Cincinnati, could not resist the temptation to explore the Bronze Age antecedents of the Valentine card sent by Carl Blegen to Elizabeth Pierce in 1923. Check out their remarks below.

It is always dangerous to over-intellectualise love, particularly when expressed by a man to a woman on Love’s own holiday, but it is difficult, nonetheless, for scholars to avoid casting an academic eye on the caricature produced by Piet de Jong for Carl Blegen’s 1923 Valentine to his future wife, Elizabeth Pierce (see “My heart is beating: February 13, 1923”), as posted recently to this blog by Natalia Vogeikoff.  For the drawing that de Jong produced must be a caricature of Blegen himself, one immediately recognizable from the distinctive blond hair. That makes this modest little drawing one of the very first in a series that de Jong famously executed in Greece during the 1920s and 1930s, and that were later collected and published by Rachel Hood in 1998. END_OF_DOCUMENT_TOKEN_TO_BE_REPLACED 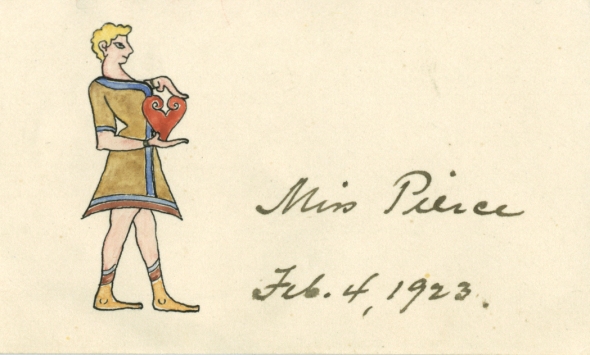 This little Valentine was included in a letter mailed from Athens to Rome in early February 1923.   Carl Blegen, Secretary of the American School of Classical Studies at Athens, asked his friend and artist Piet de Jong to draw the Valentine for his beloved Elizabeth Pierce. The Bronze Age figure on the card alluded to his recent work with Alan Wace which argued that the Mycenaean culture of mainland Greece had nothing to do with Minoan colonization, as Sir Arthur Evans had believed, and should instead be called “Helladic.” The image certainly hits the mark. END_OF_DOCUMENT_TOKEN_TO_BE_REPLACED