← The Man from Damascus, the Good Wife, and Baby Solon: R.I.P. at the American School of Classical Studies at Athens
The Bohemian Past of Madame Gennadius →

Who Went to Schliemann’s Wedding?

Curtis Runnels, Professor of Archaeology at Boston University, here contributes to From the Archivist’s Notebook a story about the accidental discovery of an original letter by Heinrich Schliemann at an Antiquarian Book Fair in Boston. The letter was found inside an old Greek-English lexicon that Runnels bought for his book collection.  In addition to doing fieldwork and publishing extensively on Palaeolithic archaeology in Greece, Runnels is also the author of The Archaeology of Heinrich Schliemann: An Annotated Bibliographic Handlist (Archaeological Institute of America; available also as an ebook from Virgo Books).

Experienced booksellers and collectors always look through old books that come into their possession to see what might have been left between the pages.  Some people make collections of their finds, which range from the curious to the valuable.  It can be an exciting business: almost anything may turn up in a book, from gold coins and paper money to love letters and flowers—even a strip of bacon (cooked or uncooked, one wonders).  It was a matter of habit, therefore, that induced me to leaf through an old Greek-English lexicon that I purchased last November at the Boston International Antiquarian Book Fair.  Of all the finds I have made in old books, this was perhaps the best: a letter written by Heinrich Schliemann.  It was tucked inside the first volume of A Lexicon of Modern Greek-English and English-Modern Greek by N. Contopoulos, which was published in two volumes in 1867 [volume 1] and 1869 [volume 2] in Smyrna by B. Tatikidou (vol. 1) or B. Tatikianou (vol. 2).

The lexicon where Curtis Runnels found the Schliemann original

To whom had the letter been sent?  On the first free end paper of the first volume of the Lexicon there is the ink ownership inscription of ‘S. D. Wilcox, Athens, Sept. 1869,’ and on first blush it would seem that Wilcox was the intended recipient.  What is the letter about?  Written in Modern Greek on a single folded sheet of lined blue note paper, entirely in Schliemann’s own hand, the letter concerns Schliemann’s upcoming marriage to Sophia Castromenos (or Engastromenos). (A copy of the letter exists in the Heinrich Schliemann Papers at the Gennadius Library of the American School of Classical Studies at Athens. Schliemann used to keep copies of his outgoing correspondence.)

I have the honor to inform you that my wedding ceremony will take place the day after tomorrow, on the present Thursday 11 [sic]/23, and for this, according to your wish I will come for you on that day at the hour of 1 ½ in order to take you with me. Therefore be kind enough to take with you both my registration and my passport.

Please accept the affirmation of my sincere regard,

Robert Porter Keep. On the contribution of the Keep family to American education, see http://www.keepdna.net/keep_family_dna_project_032.htm

At first sight, this is clear enough.  But wait: there is a problem.  The letter is addressed to a Consul, and assuming that Schliemann was writing to the American Consul (there are good reasons for assuming so, but the French Consul is also a possibility), the United States Consul was not Samuel Wilcox, but Robert Porter Keep (1844-1904). Keep was a Classical scholar with a special interest in Homer who graduated from Yale University in 1865, and became the US Consul in Piraeus from 1869 to 1871.  Later, he would travel and study in Germany, returning eventually to the US to teach Greek in the Williston Seminary in Easthampton, Massachusetts, from 1876 to 1885, and the Norwich Free Academy in Norwich, Connecticut, from 1885 to 1903.  At the Norwich Free Academy he convinced William Albert Slater, who had already funded the erection of the Slater Memorial Museum, to add to his gift funding for the acquisition of 227 casts of Classical and Renaissance sculpture. Today these casts constitute the core collection of the Slater Memorial Museum. (We would like to thank Nina Barclay for informing us about Keep’s involvement with the collections of the Slater Memorial Museum.) Keep was also related to Sarah Porter, the founder of the famous Miss Porter’s School in Farmington, Connecticut. Upon her death in 1903, as the executor of his aunt’s will, he began extensive repairs and renovations at the school, and also appointed his wife, Elisabeth Hale Keep, as the new Head of the School. After his sudden death from pneumonia in 1904, Mrs. Keep, first, and their son, Robert Porter Keep Jr., later, would run the school until 1944. Porter Keep is remembered today for his innovative school curriculum in the Classics and for his translation of Autenrieth’s Homeric Dictionary, a copy of which I have in my library to this day.

Samuel Darwin Wilcox (1846-1874), on the other hand, was a graduate of Hamilton College in New York (1866), and after graduating from Hamilton he joined the faculty of Robert College in Constantinople as a tutor in Rhetoric from 1867 to 1869.  After he left Robert College, he travelled widely, and for a time resided in Athens before returning to the US in 1870.  Back home in New York, he became Professor of Rhetoric and Elocution at Hamilton College, a position he resigned in 1872 due to ill health.  He died in Napoli, NY, in 1874.

So what was Samuel Darwin Wilcox doing with Schliemann’s letter to Porter Keep?  Did he know Porter Keep, or for that matter Heinrich Schliemann?  There are a few suggestive clues that will lead us eventually to a final hypothesis.

It seems that Samuel Wilcox did have a reason to be interested in Schliemann and to seek his acquaintance in Athens.  There is a letter to Schliemann in the Gennadius Library Schliemann Archives from Frank Calvert in the Troad, written for him by his brother, and dated 8 September 1869 that includes this interesting passage:

“Mr. Wilcox, an American gentlemen, who has been staying with us, leaves for Athens by the same Steamer which conveys the present [letter].  He has just visited the Troad and being much interested as to the site of the Homeric Ilium we have had much [sic] pleasant conversations on the subject.”

Athens, Monastiraki, 1869. Photo by William J. Stillman who had settled in Athens by late 1868. Stillman, who wrote frequently in the Nation, would later fiercely criticize Schliemann’s excavations at Troy and Mycenae.

It would seem, therefore, that Samuel Wilcox learned of Schliemann’s interest in the problem of the location of Homeric Troy from Frank Calvert, and would thus have had every reason to seek an introduction to Schliemann when he reached Athens.  I think it also extremely probable that Samuel Wilcox and Robert Porter Keep would have struck up an immediate acquaintanceship in Athens, if not a friendship.  They were both young men (in their mid-20s) and from the same region in the United States.  They were both college educated and had interests in Homeric studies. They were both traveling in Greece, which was unusual for young Americans at this time (twelve years before the founding of the American School of Classical Studies at Athens would make it possible for more young Americans to live and study in Greece).  Wilcox would no doubt have sought out the US Consul, Keep, upon arrival as a matter of protocol, and with their interests in Homer, as well as their similarities in age and background, they would have had much to talk about.  I find it difficult to imagine that Schliemann’s plan to excavate at Hisarlik was not part of their conversations. 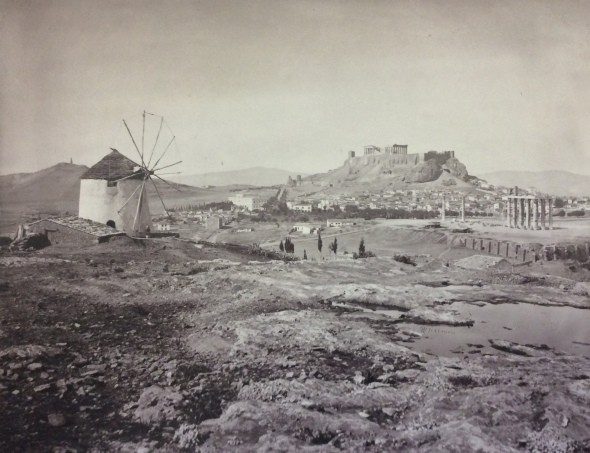 Athens, Temple of Zeus and Ilissos river, 1869. Another photo by William J. Stillman from his book The Acropolis of Athens, London 1870.

This is all fine, but we still have not idea how Wilcox came into possession of Schliemann’s letter, if it had indeed been sent to Keep in his official capacity as US Consul.  We would have to be very lucky indeed to confirm any of this in the absence of some new piece of evidence, but I suspect that Keep gave the letter to Wilcox as an example of Modern Greek so that he could practice reading it with his new lexicon.  That is the simplest hypothesis.  But—just perhaps—being pressed with other obligations, Keep could not go to the wedding on that Thursday, and so he asked Wilcox to go in his place, giving him Schliemann’s letter, which contained the relevant information about day and time.  If so, Wilcox saved the letter as a momento of what might have been an interesting occasion for him.  We shall in all probability never know for sure how Samuel Wilcox got the letter, but it is likely that these two young Americans, both enthusiastic about the search for Homeric Troy that was ‘in the air’ at the time, were curious about this German-Russian eccentric millionaire who was marrying the young Greek girl and talking of his plans to excavate at Hisarlik and bring Troy to light.

Schliemann was not yet the famous archaeologist he was to become in the 1870s after both Wilcox and Keep had left Athens, and he was no doubt distracted by his upcoming wedding, but I like to imagine him meeting with these young Americans, talking with them about Homer and archaeology, perhaps communicating with Keep in Greek because of their shared passion.  If that were the case, then Samuel Darwin Wilcox may have kept this letter for the rest of his own short life as a souvenir of an exciting time at the very beginning of Aegean Bronze Age archaeology.

It is very possible that Keep and Wilcox were the only foreigners who attended Schliemann’s wedding on September 23, 1869. There is no mention of it in the Athenian newspapers, but then why should we expect any publicity? Schliemann was almost unknown in the Athenian high-society circles of the time; the same applies to Sophia’s family. Not to mention that Schliemann had arrived at Athens only two weeks before his imminent wedding –not even entirely sure that he would get married (after all Sophia had rejected him after their first meeting) and to which one of the Castromenos sisters (the family was also pushing one of Sophia’s elder sisters). Schliemann’s second wedding in 1869 must have been a simple ceremony with only Sophia’s relatives attending. Keep’s and Wilcox’s presence would have been most welcome at an otherwise strange event.

7 Comments on “Who Went to Schliemann’s Wedding?”