I confess that I have long been a fan of any Erik Larson novel, from the time my mother-in-law gave me The Devil in the White City: Murder, Magic, and Madness at the Fair That Changed America (2003). But did I say novel? His non-fiction tales read like novels, and The Devil is currently being made into a major motion picture (starring Leonardo DiCaprio and directed by Martin Scorsese). For my birthday this year, my mother-in-law Nan hit another homerun: Dead Wake: The Last Crossing of the Lusitania — a terrific (and fast) read. (I finished it in just over two days, one of them on a trans-Atlantic flight, a suitable environment for reading about an oceanic disaster!)

Larson builds suspense in Dead Wake by switching the perspectives of his narrative from the British passenger ship Lusitania to U-20 (the submarine that sunk it in 1915), the personal histories of passengers, Room 40 (the secret British spy office that surreptitiously monitored German coded transmissions to and from its warships), and Woodrow Wilson’s White House. Ultimately these perspectives converge off the coast of Ireland on the afternoon of May 7, 1915, when, on her 202nd Atlantic crossing, a single torpedo fired from the U-20 hit the Lusitania and exploded. A second explosion, a minute or so later (its origin still a mystery), then sent the oceanliner to the bottom of the Irish Sea in just 18 minutes, a dozen miles from Queenstown (now Cobh), Ireland. The goal had been to reach harbor at Liverpool later that day, but to do so required entering a so-called “exclusion zone” declared by Germany a few months earlier, in an attempt to isolate Great Britain from supplies.

I learned an enormous amount from this book. One thing I didn’t know was that passengers had been warned by the German government itself against sailing on the Lusitania on this return voyage from New York. An announcement had been published in prominent American newspapers the day before it set sail.

TRAVELLERS intending to embark on the Atlantic voyage are reminded that a state of war exists between Germany and her allies and Great Britain and her allies; that the zone of war includes the waters adjacent to the British Isles; that, in accordance with formal notice given by the Imperial German Government, vessels flying the flag of Great Britain, or any of her allies, are liable to destruction in those waters and that travellers sailing in the war zone on the ships of Great Britain or her allies do so at their own risk.

But few passengers cancelled their passage, and the loss of life was terrible. Of 1,266 passengers and a crew of 696, 1,191 died and hundreds of bodies were never recovered. Hardly any passengers had taken the threat seriously, and many believed that British destroyers would escort them to their final destination.

The Lusitania was thought by many to be indestructible; that it would sink in just 18 minutes was unimaginable.   On the occasion of a trial voyage in 1907, one American passenger remarked that the ship was “… in itself a perfect example of all that man knows or has discovered or invented up to this moment in time.”

The interior of the Lusitania

It and its sister ship the Mauretania had been built in 1902 with loans and a subsidy from the British government so that the Cunard Line could regain a competitive position in the Atlantic passage. Speed, as well as luxury (passengers could bring 20 cubic feet of luggage!), was of premium importance: the Lusitania and the Mauretania offered both. The Mauretania, in fact, held the Blue Riband (an unofficial award to the ship with the fastest average speed on a westbound Atlantic crossing) from 1909 to 1929. With such speed, the Lusitania could outrun any German U-boat, but it was not traveling at full speed, owing to mechanical problems.

Could the disaster have been avoided? Did the British War Office take all precautions? Why was a British destroyer capable of quickly reaching the sinking ship quickly ordered back to port? Larson addresses these and other questions honestly and fairly, avoiding conspiracy theories that claim Churchill let the Lusitania deliberately sink in order to draw the United States into the war.

As I read Dead Wake I began to think about the relationship between German attacks on passenger ships and the fortunes of the American School of Classical Studies at Athens (ASCSA) during WW I.

In July 1914, nearly a year before the Lusitania was sunk, the Great War began when the Austro-Hungarian Empire invaded Serbia. The conflict soon engulfed much of Europe, but not Greece. The Greek royals sympathized with Germany, but Greece’s legendary prime minister Eleftherios Venizelos supported the Allies — a conflict that led to the “Great Schism,” when Venizelos and his supporters left Athens and established a rival government in Thessaloniki in August 1916. In late May 1917, however, Venizelos returned to Athens, the king abdicated, and Greece at last entered the conflict on the side of the Allies in the final year of the war.

Southern Greece had remained an oasis in the eye of the storm, even as battles between the Allies, the Bulgarians, and the Ottoman government were raging in Macedonia and Thrace. And archaeological business at the ASCSA continued as usual, at least in so far as it involved permanent staff members William Bell Dinsmoor, Bert Hodge Hill, and Carl Blegen. Excavations were reduced in scale for lack of funds, but Blegen dug Korakou in 1915 and 1916 and Gonia in 1916, while Hill and Dinsmoor excavated cemeteries at Corinth. Dinsmoor, as Architect of the School, investigated the west slope of the Acropolis and pursued his study of the Propylaia. In August 1918 Dinsmoor was finally called and commissioned a Lieutenant in the U.S. Army, but by 1917 no money at all was left in the coffers of the School. 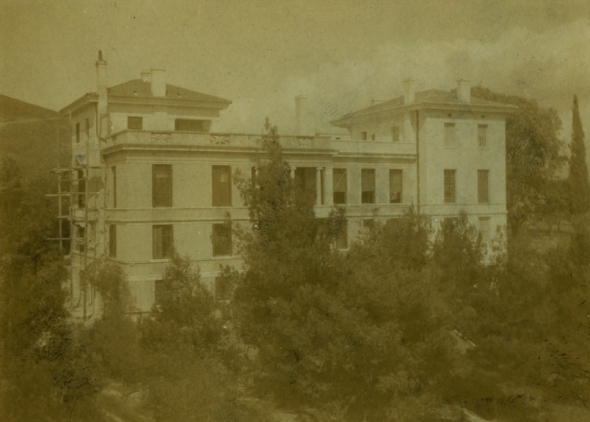 The ASCSA, ca. 1916 (The so-called “Addition” to the Main Building had been built). Source: ASCSA, William Bell Dinsmoor Papers

While archaeology continued to flourish, the pedagogical mission of the School lapsed, first because most passenger ships were taken out of service. Already in August 1914, Zillah Dinsmoor wrote to her mother that Italy was filled with stranded Americans who could not access their lines of credit. The situation worsened when German attacks on merchant and passenger ships began in earnest. It wasn’t safe to cross the Atlantic and, certainly after the sinking of the Lusitania, not many cared to risk the passage. As a result, there was no candidate for a fellowship in 1913-14 and only one student in residence in 1914-15. There was no visiting professor in 1915-16, and the three fellows chosen for 1917-18 postponed their studies. Because teaching had ground to a halt, some member institutions even withdrew their financial support for ASCSA.

At the root of the problem was the increasing viciousness of German aggression, although the published reports of the Managing Committee do not elaborate on the subject. It is clear from Carl Blegen’s diary that attacks occasioned fear and evoked anger.

“Met the Dinsmoors tonight.  They had been invited to a dinner at Karo’s for tomorrow night.  The dinner was arranged for them.  But Mrs. Dinsmoor says she won’t go after the Lusitania affair. So she has written a rather sharp and impolite, it seemed to me (she showed me a copy), note to Karo saying that because of what has happened it will be impossible for her to come.”

[Georg Karo was the director of the German Archaeological Institute]

“Karo has replied to the Dinsmoors saying that henceforth he will have nothing further to do with them.  He will recognize D. in his scientific capacity but no further.” 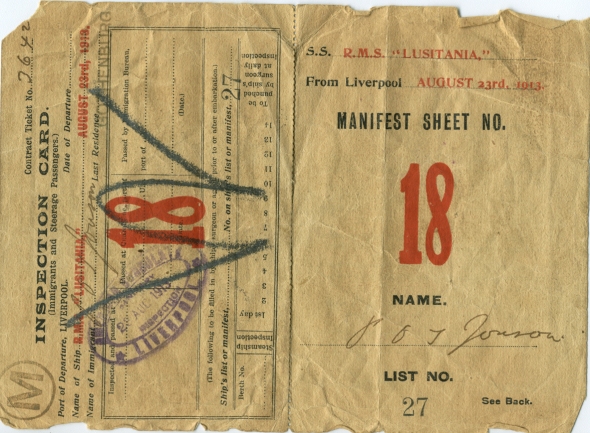 In 1913 a Swede, Per Jonson, sailed, as an immigrant, to New York. Jonson would later change his name to Oscar Broneer and become a famous American archaeologist. Here is his ticket for passage on the Lusitania (ASCSA, Oscar Broneer Papers).

By 1915, the German command had largely decided to leave the choice of targets to the discretion of individual U-boat captains, not least because of the impossibility of communicating with them at high sea. Larson focuses on the character of these “lone wolves,” who were rewarded for the tonnage they sunk and whose decisions were seldom questioned. Some, such as Georg von Trapp, later immortalized by the “Sound of Music,” but then a submarine captain in the Austro-Hungarian navy,” had scruples. After sinking a large French ship and killing 684 sailors, he remarked: “So that’s what war looks like! … Simply cold-blooded to drown a mass of men in an ambush.”

Obviously Greeks also suffered from the German disregard for civilian casualties. One was particularly prominent: Michael Papadopoulos, 43, a Greek citizen from Athens, Greece. Papadopoulos was born on the peninsula of Peramos [Cyzikos], but in Istanbul as a carpet merchant created a monopoly in the merchandising of rugs in Europe and America. He had engaged the prominent Constantinopolitan architect P. D. Fotiades to build a girls’ school in Peramos.

Captain Walther Schwieger, who fired the torpedo from U-20 that caused Papadopoulos’s death and that of so many others, was described by friends as a kindly man who couldn’t hurt a fly. One of his junior officers said of the U-20: “She was a jolly boat, the U-20, and a kindly boat … [Schwieger] was the sole of kindness toward the officers and men under him … His temperament was joyous and his talk full of gaiety and pointed wit.” Doubtless it was necessary to disassociate oneself from the reality of the situation in order to bear it.

Larson reports a woman claiming to be Schwieger’s fiancé later claiming that his attack on the Lusitania had left him a “shattered man.” Still, only five minutes after sinking the Lusitania, he had attacked a large steamer coming to its aid. In all he had returned to home port, having sunk 42,331 tons of shipping during this single patrol. Two years later, in September 1917, while trying to escape an enemy destroyer in the North Sea, Schwieger, his ship, and crew were all lost, the victims of a British mine field.

By then the sinking of the Lusitania lay nearly two years in the past. The U.S. had entered the war in April 1917, and the tide would turn against Germany in the following year. Victory would belong to the Allies and Greece.

One Comment on ““This Horrible Crime Will Have to be Paid For”: The Sinking of the LUSITANIA”