Is this Julia Ward Howe?

Curtis Runnels, Professor of Archaeology at Boston University and an expert in Palaeolithic archaeology in Greece, and his wife Priscilla Murray, an anthropologist and Classical archaeologist, here contribute to From the Archivist’s Notebook a story about the purchase of a miniature portrait of an elegant, young woman in an antique fair, their research to identify both the subject of the portrait and its creator, and, finally, their thrilling discovery.

Even from a distance, the small portrait of a beautiful young woman had a commanding presence. We bought the miniature watercolor on ivory (less than 10 by 8 cm) at an antique fair in Holliston, a town near Boston, Massachusetts, because the sitter was dressed a la Gréque with a Greek column in the background. The quality of the painting, which points to a very accomplished miniaturist, together with the appearance and accoutrements of the subject, suggest that the painting was an important commission by a socially prominent person. We loved the painting, and of course, we were intensely interested in the identity of the young woman.

The antiques dealer could not provide a provenance, but we believe that the picture spent much of its life in Boston or thereabouts.  The period frame, perhaps original, is marked “Foster Bros., Boston,” and the style of the miniature is typical for miniature artists working in Boston and New York City in the 1830s and 1840s. (The Foster Brother Records are housed in the American Art Archives.) Although miniature watercolors on ivory were popular in the years before photography, the quality of this miniature was such that only the most affluent could have afforded the commission.  So who would have chosen to be depicted in a “Greek” costume and setting?

The sitter wears a white dress with a striking blue shawl. She has a red tasseled hat of the kind made popular by Queen Amalia of Greece (1818-1875). Pearls are strung in her hair and she has pearls around her neck.  The dress and jewelry suggest high status and wealth, and the beauty of the sitter is remarkable. We listed names of prominent young women in New York and Boston and considered the possibilities.  We concluded that this may be a portrait of Julia Ward, a “bluestocking” born into an affluent New York family and a notable heiress who at the age of 24 moved to Boston about the time this portrait was painted to marry Samuel Gridley Howe (1801-1876), the famed physician, philanthropist, and Philhellene. Did Julia Ward Howe have this miniature painting executed as a gift for Samuel Gridley when they were engaged, or soon after their marriage, as was the custom of the day?

We studied the picture and frame carefully but could find no identifying information, so we had to look elsewhere for clues to the identity of the sitter. The young woman in the painting resembles the marble bust of Julia Ward at age 22 by Shobal Vail Clevenger (1812-1843) in the Boston Public Library, which is illustrated in the Pulitzer-Prize winning biography of Julia written by two of her daughters (Laura E. Richards and Maude Howe Elliott, Julia Ward Howe, 1819-1910, Boston and New York: Houghton Mifflin, 1915). 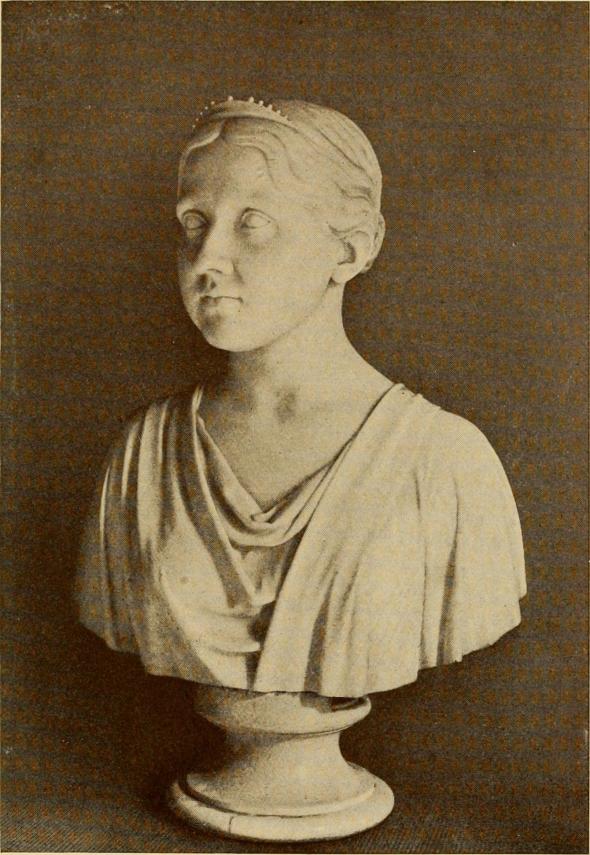 We have other evidence that our portrait is Julia.  One of the most celebrated miniaturists working in this period was Anne Hall of New York (1792-1863), who is known to have painted Julia Ward as a child with her siblings Samuel and Henry.  Anne Hall was also directly connected to the Ward family through her sister Eliza’s marriage to Henry Ward and is known to have made several paintings of the Ward family. The style of our miniature is consistent with those miniatures of Anne Hall that we have examined. The most conclusive evidence that the young woman in our picture is Julia comes again from her daughters’ biography where we learn that one of Julia’s prized possessions was a string of pearls given to her by her father, fabulously valuable jewelry for the time. 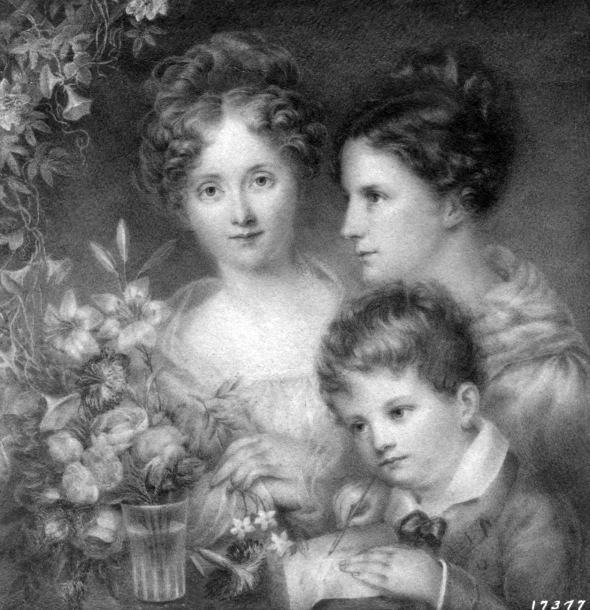 Even better is the account by a visitor to New York City in 1843 that describes Julia as she strolled down Broadway with her fiancé, Samuel Gridley Howe. The witness relates that “the pretty blue-stocking, Miss Julia Ward, with her admirer, Dr. Howe…had on a blue satin cloak and a white muslin dress” (Richards and Elliott 1915, p. 75). We see this very outfit, along with the famous pearls, in our painting.  And what about the Greek cap? Julia’s daughters relate that the Wards gave sanctuary to a Greek orphan child, Christy Evangelides, for a time, so such a cap might have been familiar to them. Or perhaps it was a token to Samuel Gridley Howe’s fame as a Philhellene? 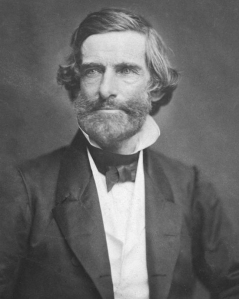 All together, we believe that there is strong circumstantial evidence that the sitter is Julia Ward Howe.  Yet one difficulty remains.  Julia had red-gold hair and the person in our painting has brown hair. Was this perhaps artistic license? Our question was answered, once again, in the daughters’ biography: red hair was unfashionable at the time, and Julia was known to color it with French pomade or comb it with a leaden comb to darken it (and ornament it with pearls, as Julia recalls in her autobiography, Reminiscences, Boston: Houghton Mifflin, 1899, p. 65).

At the time of Julia’s marriage, Samuel Gridley Howe was already famous. He was celebrated for his participation in the Greek War of Independence (and he would be active in Greek relief efforts for the rest of his life), and for his work in the Perkins School for the Blind, which he founded and directed, and which continues today in Watertown, Massachusetts, after 191 years. His most notable achievement was his breakthrough in teaching Laura Bridgman, a blind and deaf girl, to read, write, and speak. This success represented a tremendous advance in the teaching of deaf and blind people and Samuel Gridley Howe was lionized for this achievement in scientific and humanitarian circles in America and Europe. He would continue to champion many humanitarian causes in his lifetime, from abolitionism to sanitary reform.

Julia Ward Howe herself became a noted advocate of human rights, abolition, and women’s rights. She traveled to Greece with Samuel Gridley in 1867-1868 to distribute humanitarian aide to Cretan refugees (clothing that she had collected from the women of Boston, as recounted in her book From the Oak to the Olive. A Plain Record of a Pleasant Journey, Boston: Lee and Shepard, 1868). The Howes were both active in the Union cause during the Civil War, and Julia gained lasting fame as the author of Battle Hymn of the Republic, the unofficial anthem of the Union to this day.  In addition to her other activities on behalf of women’s rights and suffrage, it was Julia who first proposed Mothers Day in 1873, which has now become a national celebration. 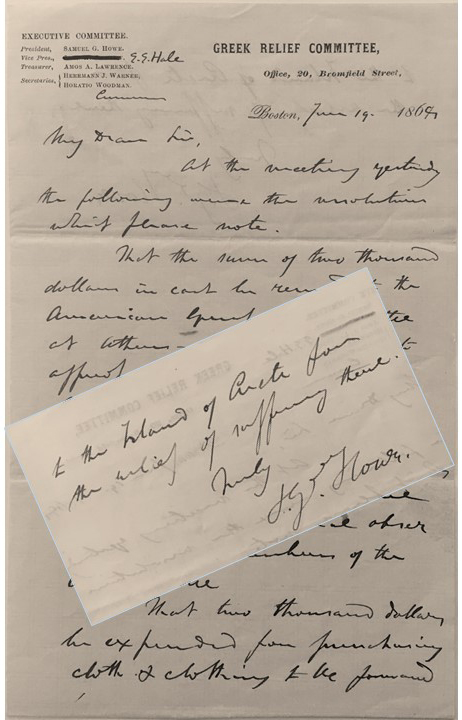 In the second half of the nineteenth century, Julia Ward Howe and Samuel Gridley Howe were among the most famous Americans as noted authors, philanthropists, humanitarians, and Philhellenes. If confirmed as a portrait of the young Julia Ward Howe, we hope that this beautiful image will continue to keep alive her memory, and the memory of the Howes together.

Editor’s Note (1): Before the construction of the Gennadius Library in 1926, the street that leads up to the Library, was known as “Howe street,” named after Samuel Gridley Howe. Today the street carries the name of the founder of the Library, Johannes Gennadius (Ιωάννου Γενναδίου).

Editor’s Note (2): Curtis asked me if I could add to the post an out-of-frame photo of the miniature for more detail and truer color. 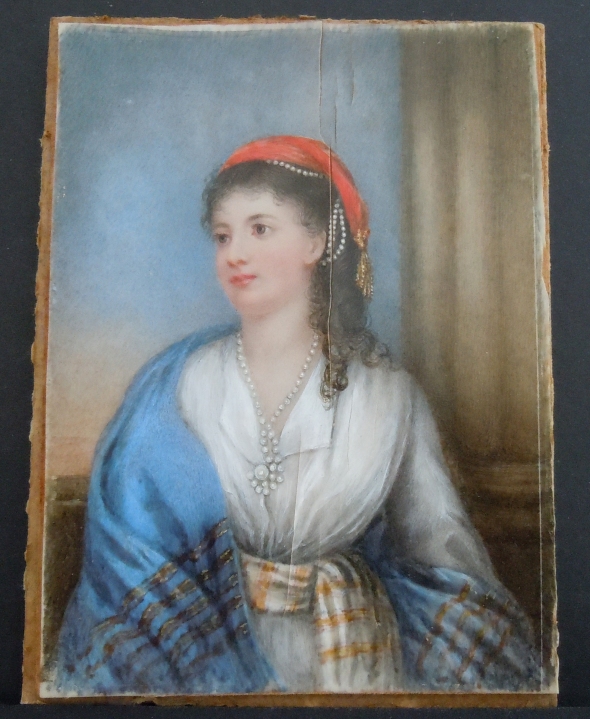 A close-up photo of the portrait of Julia Ward Howe (?). Curtis Runnels and Priscilla Murray Collection.

3 Comments on “Is this Julia Ward Howe?”